Previously, we had the opportunity to review Infinix Note 12. Yes! The main attraction of this smartphone is that Infinix concocted the Note 12 with support for the Helio G96 chipset from MediaTek and embedded 13 GB of RAM.

Yes! The actual RAM loaded by Infinix into the Note 12 is 8 GB. However, following the current trend, Infinix has also embedded 5GB of Extended RAM. So, this smartphone can have RAM up to 13 GB.

Now, towards the end of 2022, Infinix is ​​again making a surprise by presenting the newest Note series, namely Infinix Note 12 2023. Yes! Carrying the phrase “2023”, of course Infinix will present this smartphone with several improvements, right?

There are not a few gadget fans who give “two thumbs up” for the Infinix Note 12. How could I not! Coming as a middle-class smartphone that can steal attention, Infinix concocts this smartphone with an AMOLED screen panel.

Unfortunately, this smartphone screen is only 60Hz. However, on the positive side, this smartphone’s battery lasts longer thanks to the standard refresh rate. Now! For those of you who like the Always on Display feature, aka AOD, Infinix has equipped the Note 12 2023 with this feature.

Coming with an AMOLED screen, Infinix does not provide the Note 12 2023 with an on-screen fingerprint scanner. The biometric security feature is loaded on the right side, which is integrated with the power button. Infinix also still adopts a notch screen design, not a punch-hole for the front camera.

Yes! Infinix places the power button on the right side, which is not far from the volume button. Meanwhile, to accommodate SIM cards, aka SIM cards and microSD cards, you can find these slots on the left side of the frame.

The top side of this smartphone looks plain. Meanwhile, on the lower side, Infinix still complements the Infinix Note 12 2023 with a 3.5mm audio jack port. Right next to the 3.5mm audio jack port, there is a microphone hole, a microUSB port and a speaker grill, all of which are placed parallel.

Before moving on to the back, it’s a good idea to look at the side of the frame packed by Infinix. Yes! This smartphone still comes with a square side frame like the Note 12 so that it feels so comfortable when held. Its dimensions are 164.4 x 76.5 x 7.8 mm and it weighs only 195 grams.

The camera housing is also made to stand out and accommodate three lenses at once which are protected by glass. Also includes the words “50 MP F1.6/28mm”. Meanwhile, four flash LEDs are arranged horizontally, just below the camera housing.

The back panel is still made of polycarbonate plastic. Interestingly, the wider area has a blink-blink texture when exposed to light and is not easily soiled with fingerprints. Meanwhile, there are also areas that are packed with a glossy or glossy effect, so they get dirty easily with fingerprints.

In the sales package, Infinix does include a soft case to protect the back of the Infinix Note 12 2023 so that it doesn’t get scratched easily. It’s just that this soft case has a very large cut and doesn’t cover the shiny area.

For those of you who are curious about the kitchen runway that is on the Infinix Note 12 2023, you don’t have to wait long to find the answer. Your guess is right! Infinix Note 12 2023 comes with the Helio G99 chipset from MediaTek which carries 6nm fabrication technology.

Helio G99 or codename MT8781 has an Octa-core CPU. It consists of 2 Cortex-A76 cores clocked at 2.2 GHz which mates with 6 Cortex-A55 cores clocked at 2.0 GHz. This SoC is also integrated with the Mali-G57 MC2 GPU for graphics performance matters.

If you feel that the internal storage capacity of 128 GB is lacking, you also don’t need to worry anymore. Yes! Infinix has also equipped the Infinix Note 12 2023 with a slot for storing a dedicated microSD card, aka not interfering with the allocation of dual SIM cards.

Yes! The 5000 mAh battery capacity with 33W charging support is still the same as that of the Infinix Note 12. Used for normal use, such as surfing social media, checking e-mail or creating content on TikTok and Instagram Reel, this smartphone’s battery can last all day.

Now! Intrigued by the performance of the Helio G99 chipset planted by Infinix into the Note 12 2023, Alomaki also did benchmarking using the AnTuTu 9.4.2, Geekbench 5, 3DMark 2.2.4827 and GFXBench 5.0.5 applications. You can see the result in the screenshot below.

Not only that, Alomaki also “forced” Infinix Note 12 2023 to be made into a portable gaming machine. This aims to determine the battery life owned by the smartphone. The games played are PUBG Mobile, Mobile Legends: Bang Bang, Asphalt 9: Legends, and eFootball 2023.

Is the Infinix Note 12 2023 powered by the Helio G99 chipset with 8GB of RAM capable of playing Genshin Impact? No need to worry, the answer is “able”. It’s just that, you have to be satisfied with modest graphic choices.

For those of you who like to listen to music or watch movies on your smartphone, of course you will question the ability of the Infinix Note 12 2023 speakers. Yes! Infinix has equipped this smartphone with Dual Speakers which are supported by Hi-Res, although there is only one speaker grill on the lower side of the frame.

Alomaki tries to play Metallica’s newest song, Lux Aeterna via YouTube. As a result, James Hetfield’s vocals sounded so crisp and clear. Likewise with the harmonization of all musical instruments played by the heavy metal band from the United States.

Now! If you are someone who likes to listen to music via a headset on public transportation such as the Commuter Line or MRT, Infinix still provides Infinix Note 12 2023 with a 3.5mm audio port. Or you can also connect this smartphone with the TWS that you have.

There are three lenses that are accommodated in the camera housing. It consists of a 50 MP f/1.6 wide lens as the main camera, a 2 MP depth (bokeh) lens and the third lens is QVGA. Yes! The configuration of the three is similar to what Infinix installed into the Infinix Note 12.

Infinix also provides a 50 MP main lens with the Super Night feature. So, with Infinix Note 12 2023, you can also take pictures of the beautiful night city of Jakarta which looks quite good in its class. Meanwhile, the front camera is a 16 MP wide lens.

Not only equipped with the Super Night feature to make it easier for you to take pictures of objects at night, this mid-range smartphone from Infinix is ​​also equipped with several other features, such as Video, AI Cam, Beauty, Portrait, AR Shot, Short Video, Panorama and Time-Lapse.

For those of you who like to shoot with the “manual” option or like to tinker with ISO options, White Balance, Auto Focus and so on, you can choose the Pro feature. Interestingly, Infinix also includes a Film feature that makes it easier for you to make short videos using the templates provided.

For its class, the results of the Note 12 2023 camera are quite satisfying, starting from the details captured, color reproduction to dynamic range. Coupled with AI features, this smartphone camera is also capable of detecting various scenarios of objects such as food, indoor rooms to scenery.

Then, what about the night photos taken by Infinix Note 12 2023? As already mentioned, in the interface we are presented with the Super Night feature. That said, the night photos produced by this smartphone feel pretty good. 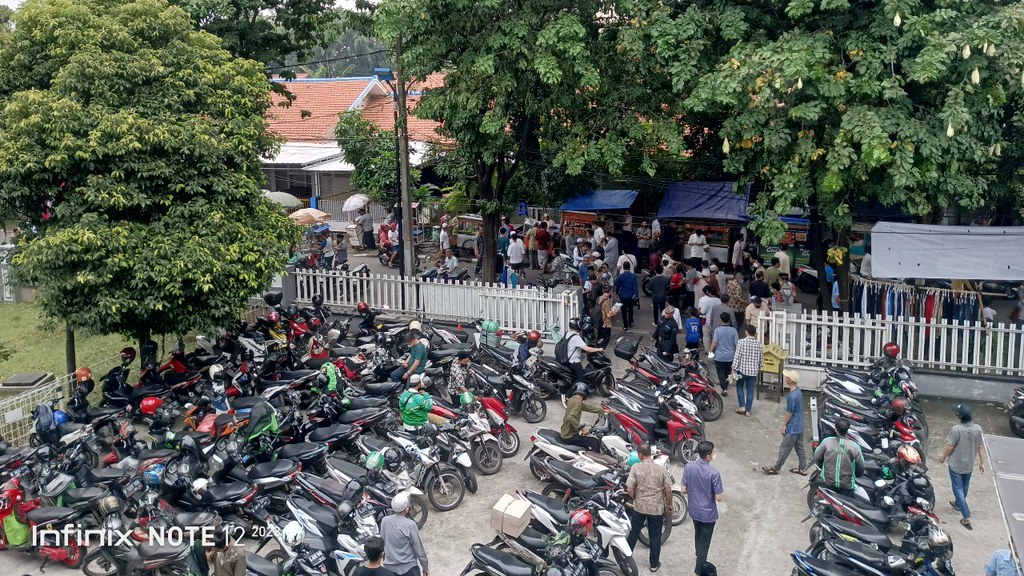 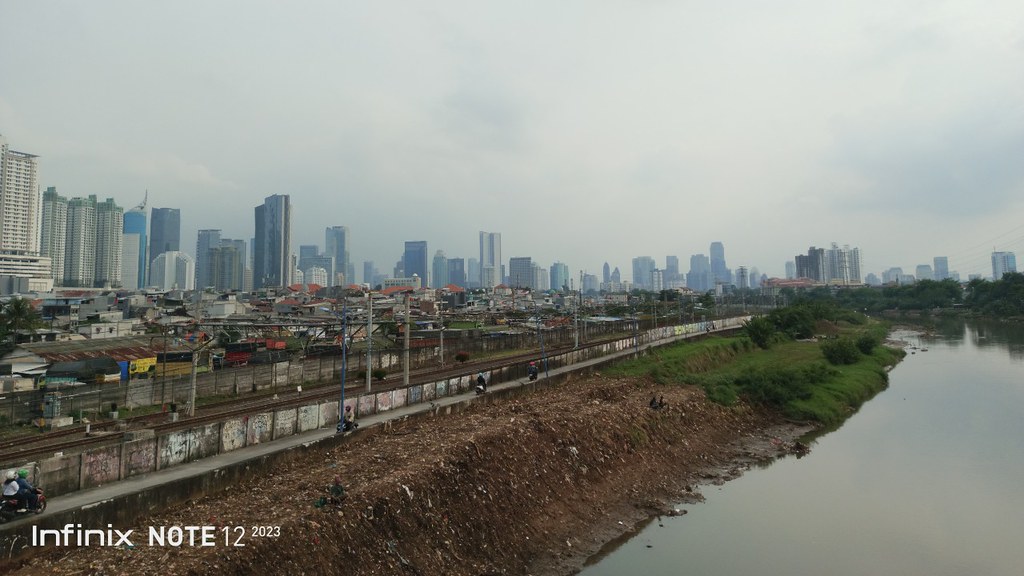 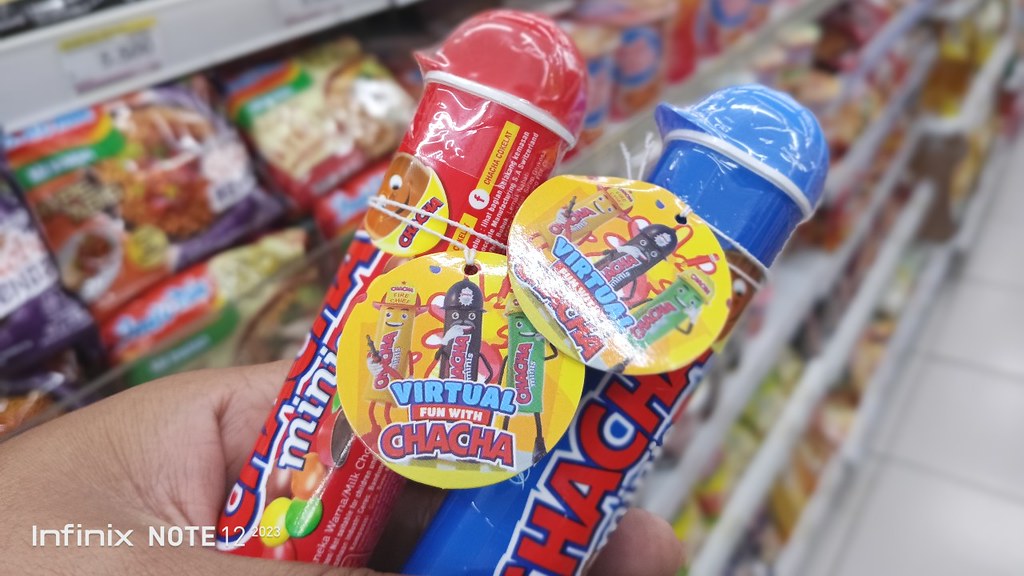 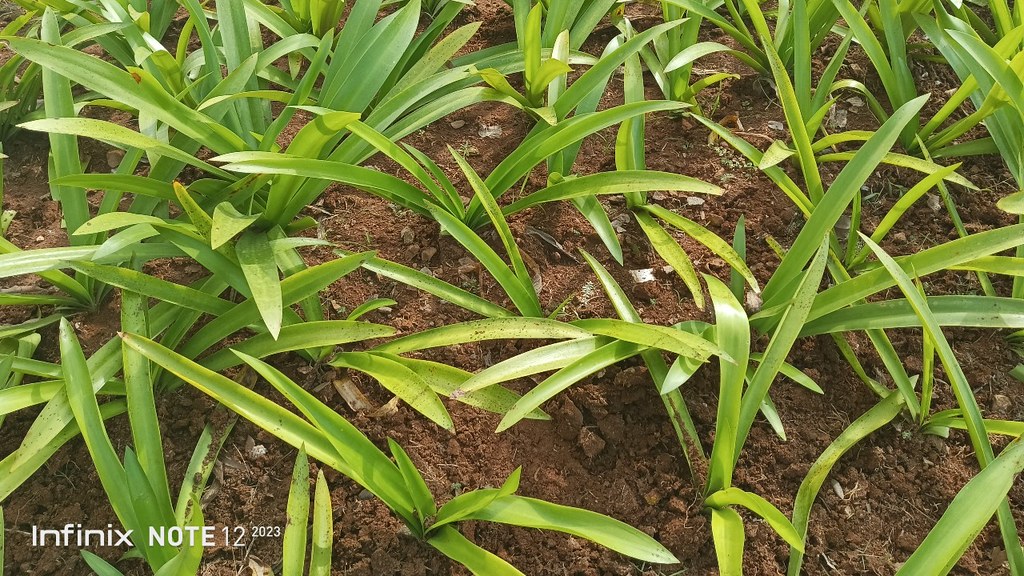 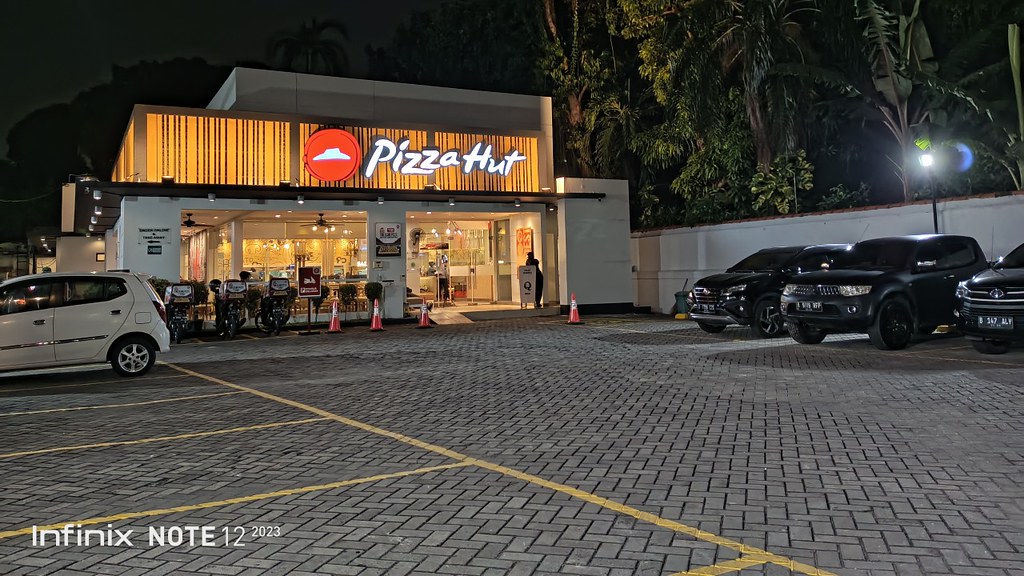 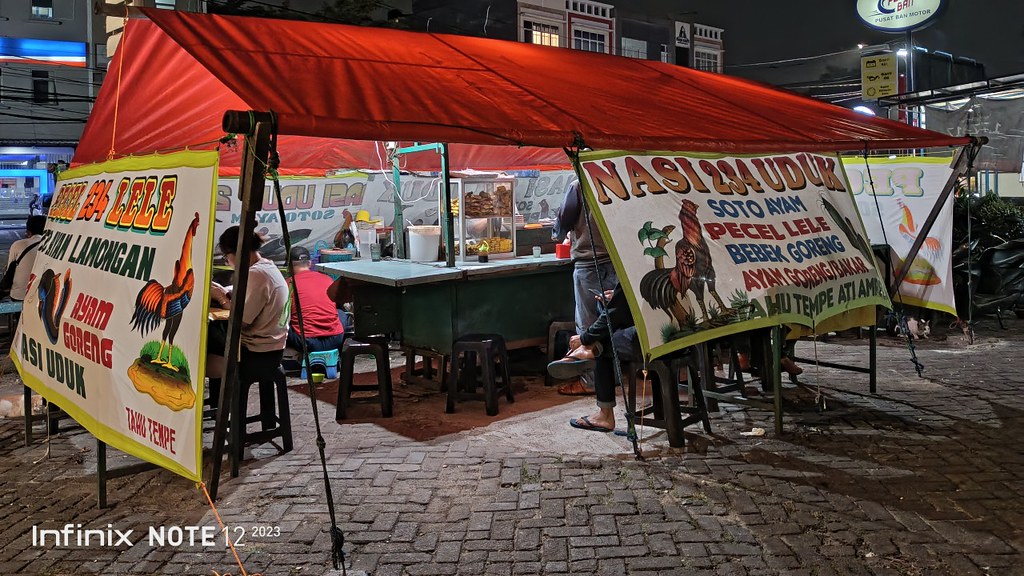 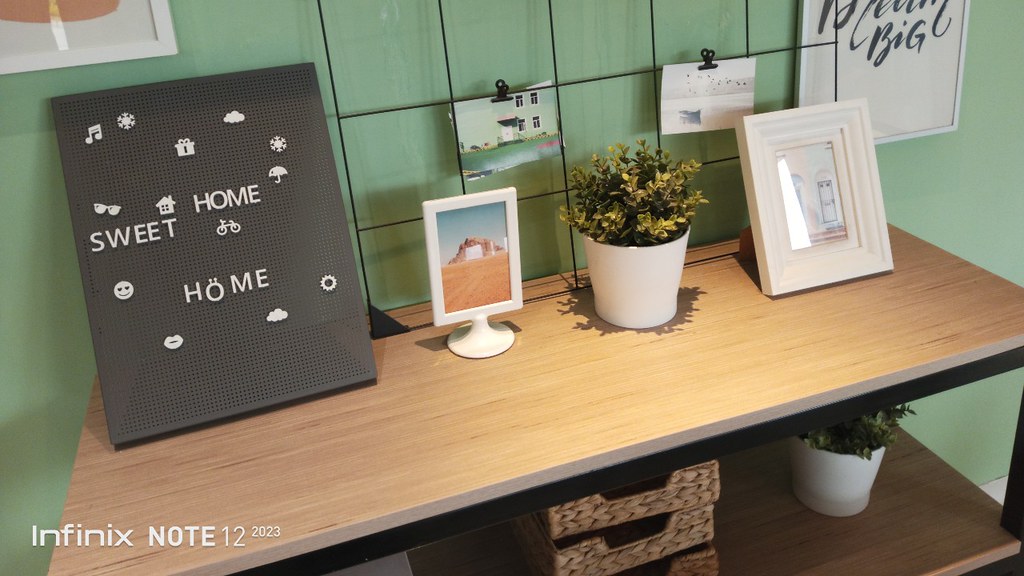 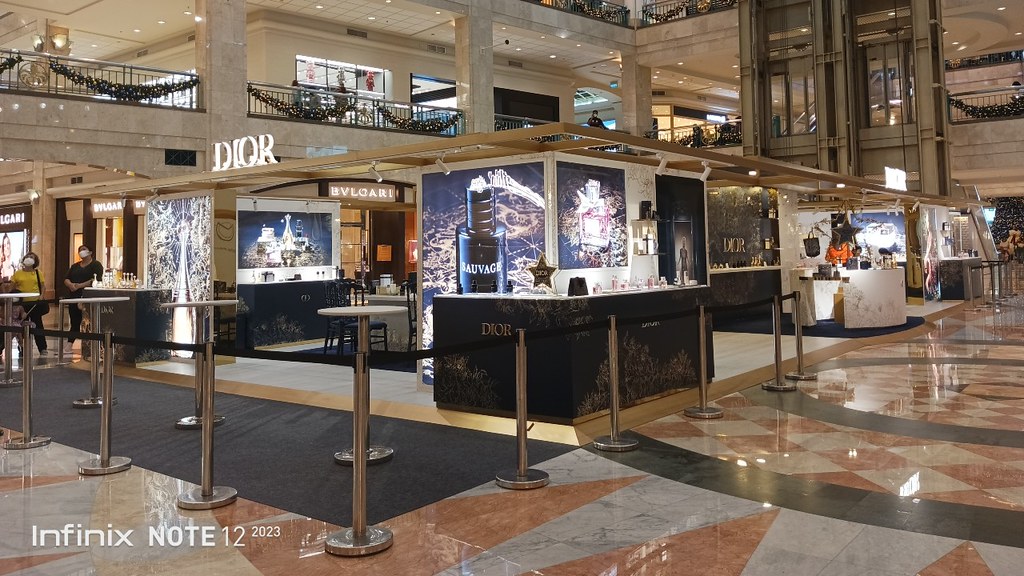 For video recording, Infinix also has Bokeh Effect and Video Beauty options that you can activate/deactivate. Then, how about the video recording? That said, it’s not that disappointing for you to upload to TikTok or Instagram Reels, especially since there’s a film feature.

Coming at the end of 2022, Infinix also offers a device design that looks more up to date. The camera housing design on the back is completely different from the Infinix Note 12 which appeared on the market at the end of last June.

This smartphone that runs on the XOS 10.6.0 interface based on Android 12 is also equipped with the NFC feature. Other support is 8GB + 5GB RAM, up to 256GB ROM, 5000 mAh battery with 33W fast charging and Dual Speakers with Hi-Res.

The 128 GB internal storage variant is priced at USD $170,00 Meanwhile, for those of you who are smitten with 256 GB of internal storage, this smartphone is offered at a price of USD $182,99.