There are major differences that can be felt when using the most affordable flagship and entry-level smartphones. For flagships, it must be equipped with extra features with a perfect score. While at the entry-level, as long as the main features work well, that’s enough. How about the realme C30, which is the latest offering in the middle of 2022?

Present to compete with a million other smartphones, realme tries to provide its newest product which is claimed to be the most stylish in its class, when many of the offers on the market look boring. Is it only the design that can be favored? The good news is that there are several other aspects.

The combination of hardware and software specifications brought by the realme C30 is quite right to provide a fairly good experience for its users. Nice to see, also comfortable to use thanks to the maintained performance. Here’s a full review of the realme C30.

If there is an affordable smartphone that carries high specifications (on paper), usually the “victim” is the design, so it looks simple or looks thick, for example. Interestingly, the realme C30 design is far from normal. So one of the most stylish millions of smartphones.

Dimensionally, it weighs 182 grams and feels very solid in the hand. It is also only 8.5mm thick, and is designed to be flat on both sides and back—making it look even more modern. Well, the rear body of the realme C30 can be said to be simple as well as special.

The camera module is made quite simply with one camera without excessive gimmick, and is flush with other surfaces. The surface of the body is made of a suitcase-style texture, derived from the realme GT Master Edition series . Besides looking cool, it is also not slippery and not easy to get dirty in the hands. The color options are also interesting, including Bamboo Green which looks like a very light green.

Please note, there is no soft case in the realme C30 sales package. But don’t worry—over the course of a few days of use, I put it haphazardly along with a few other items in the bag and the body remained safe. When I try to rotate it with two hands, it doesn’t change at all, aka really sturdy.

Now the average Android smartphone has the same screen size dimensions. Starting from the cheapest to premium flagships, both have large screen dimensions that are suitable for multimedia. The realme C30 screen is no exception, which measures 6.5 inches, HD + resolution and a standard 60Hz refresh rate.

Indeed, in entry-class smartphones, as long as the panel quality is good, it is more than enough. And for the realme C30, the color saturation is quite good—there are other, more expensive competitors with paler colors. The responsiveness is just standard, and for outdoor use it’s just safe, aka a little less bright.

What I can appreciate is the option to change the white balance in the Settings menu, while the color standard itself is made closer to DCI-P3. There’s also a “video display enhancement” mode to make colors brighter and more vivid from apps like YouTube and Google Photos.

When displaying a black wallpaper, the screen panel can actually display a fairly dark black. But for some reason, the dark mode in the realme C30 instead chooses to display a gray background. As a result, backlight bleeding is actually visible, aka bright light on the edge of the screen. It’s natural, but it should be avoided.

You also have to be more careful when using this smartphone if you want the screen glass to remain smooth. Because there is no protection at all, aka without a built-in screen protector.

Seen from the exterior, the realme C30 camera carries a very simple setup. One camera on the front has a 5MP resolution, while on the back there is an 8MP f/2.0 sensor with AI support and a fairly large physical shape. The interface of the default camera application is even simpler than the more expensive realme smartphones.

Don’t worry, the features are quite complete. You can still produce portrait photos with bokeh effects, plus professional mode, AI Beauty, and scene recognition can still be found. How about the photo quality of the realme C30 camera? In short, it’s quite enough to simply be shared on messaging platforms and social media.

In high light conditions, the colors are slightly above average and the HDR effect works pretty well in its class. Shutter alias taking photos is also quite instant. Portrait mode can also detect instant faces, even if you’re wearing a mask. When it comes to indoor and night lighting, it instantly becomes smoother.

Indeed, a special night mode is embedded in the realme C30 rear camera, and can provide extra lighting assistance. Overall, not the best, but not the worst either. You can access the complete photos in the following album. 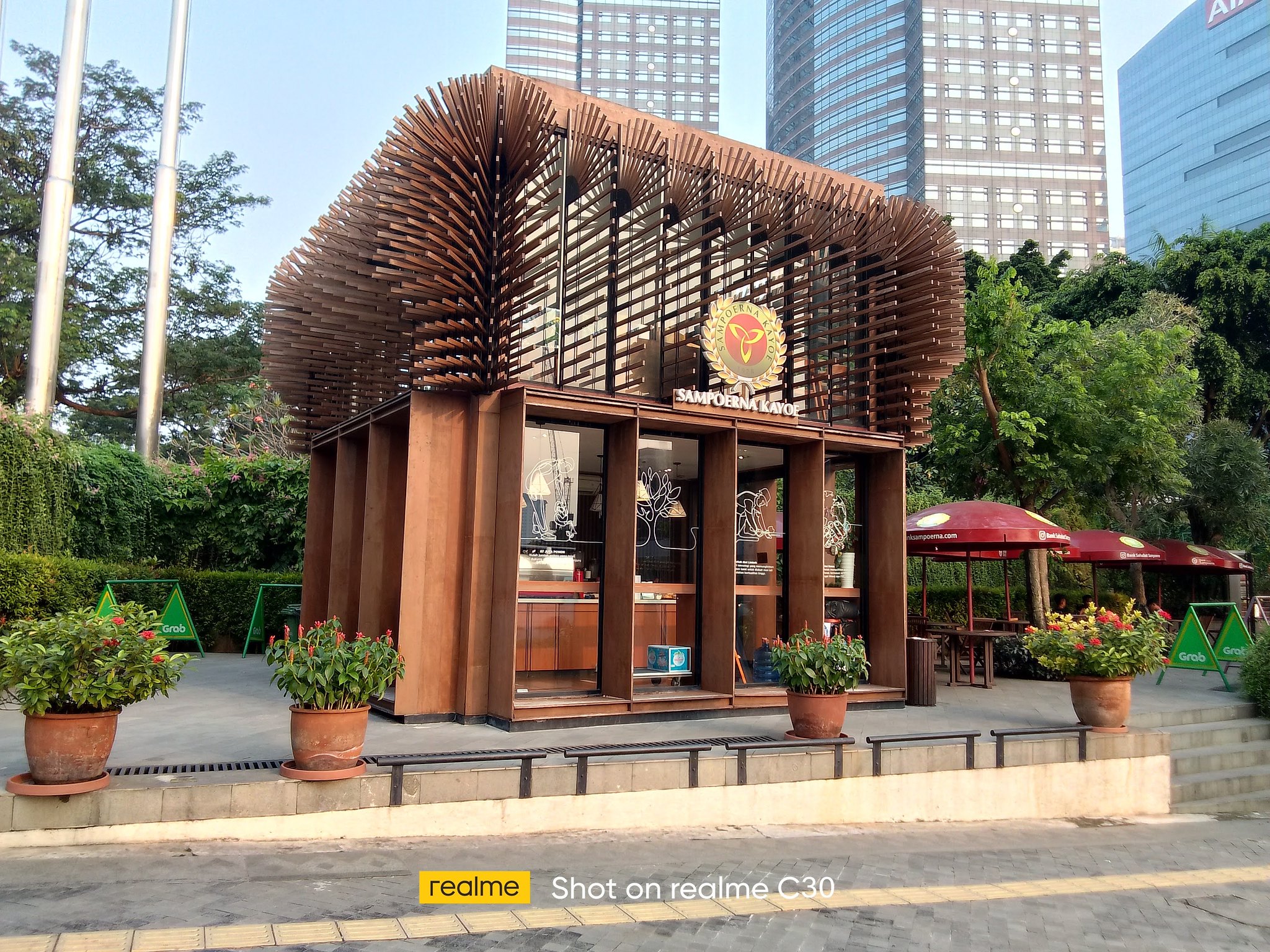 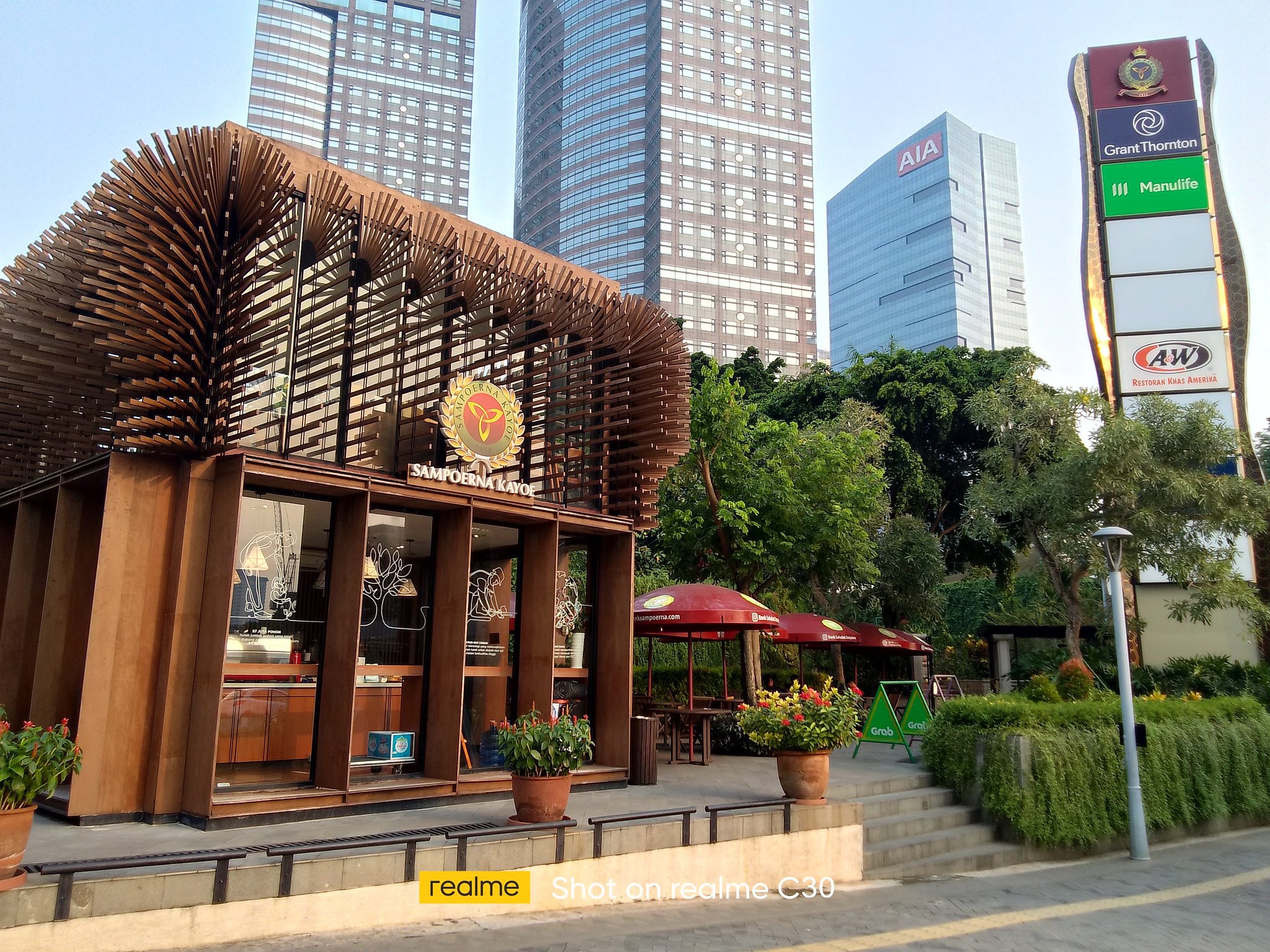 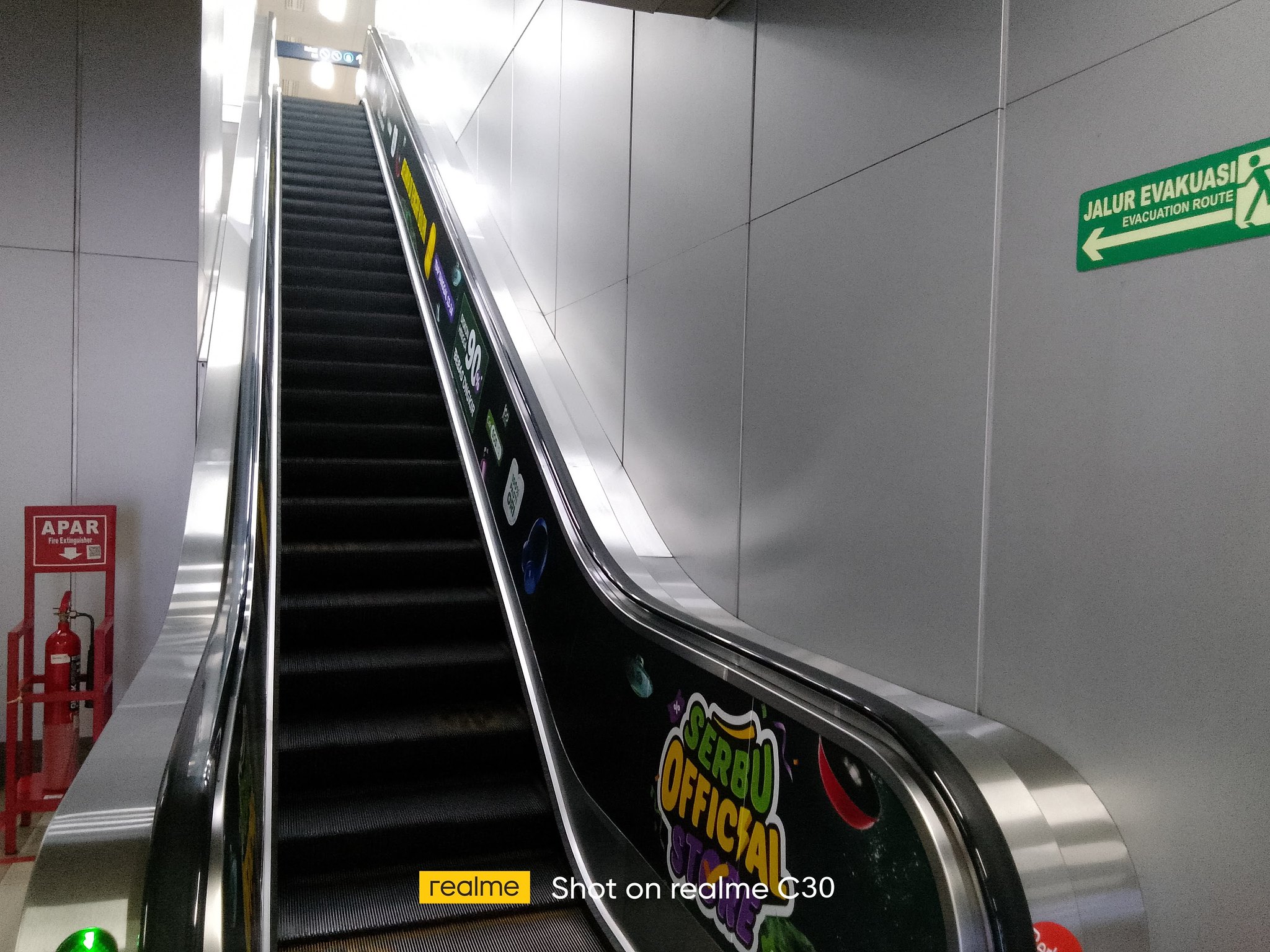 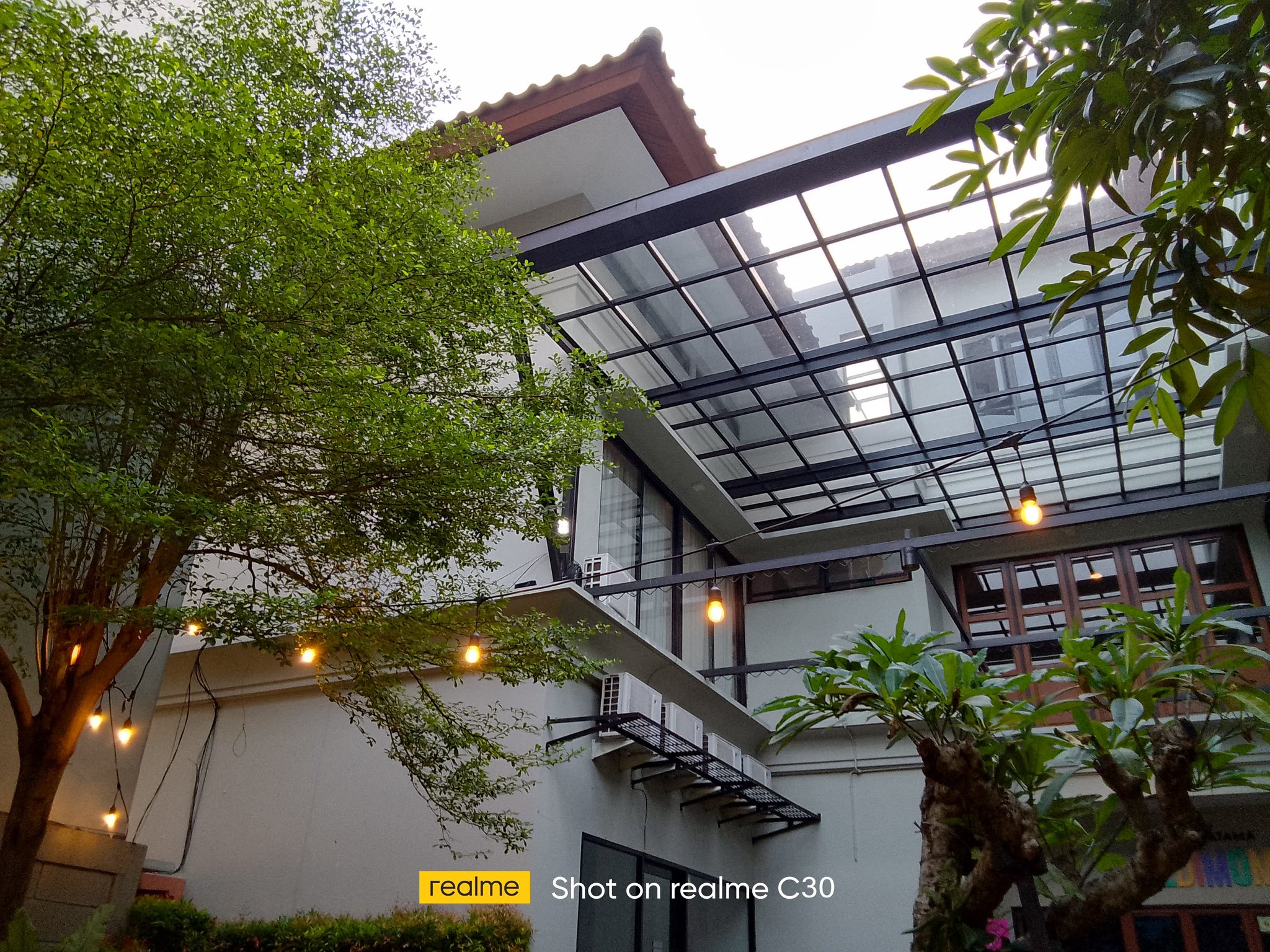 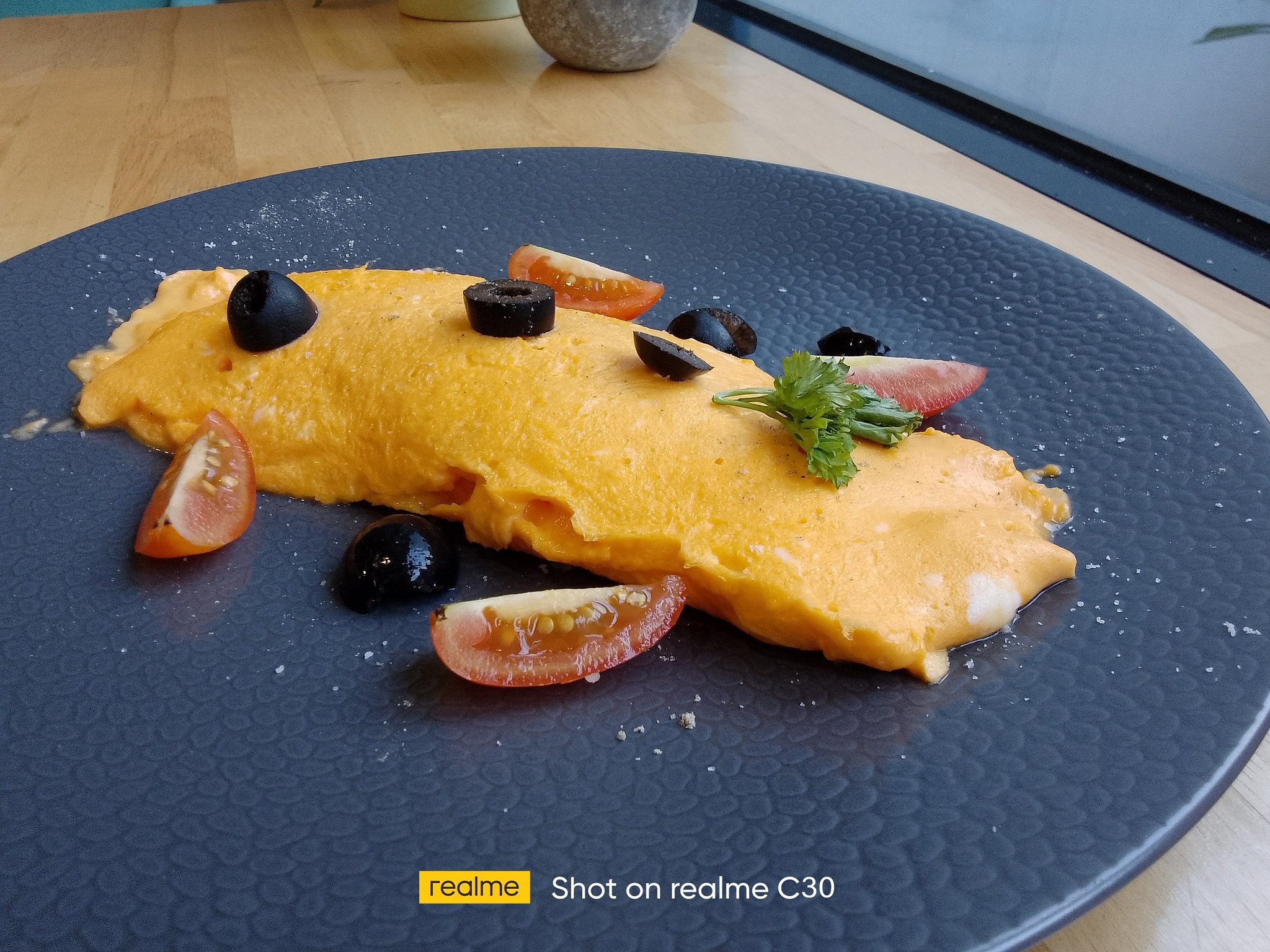 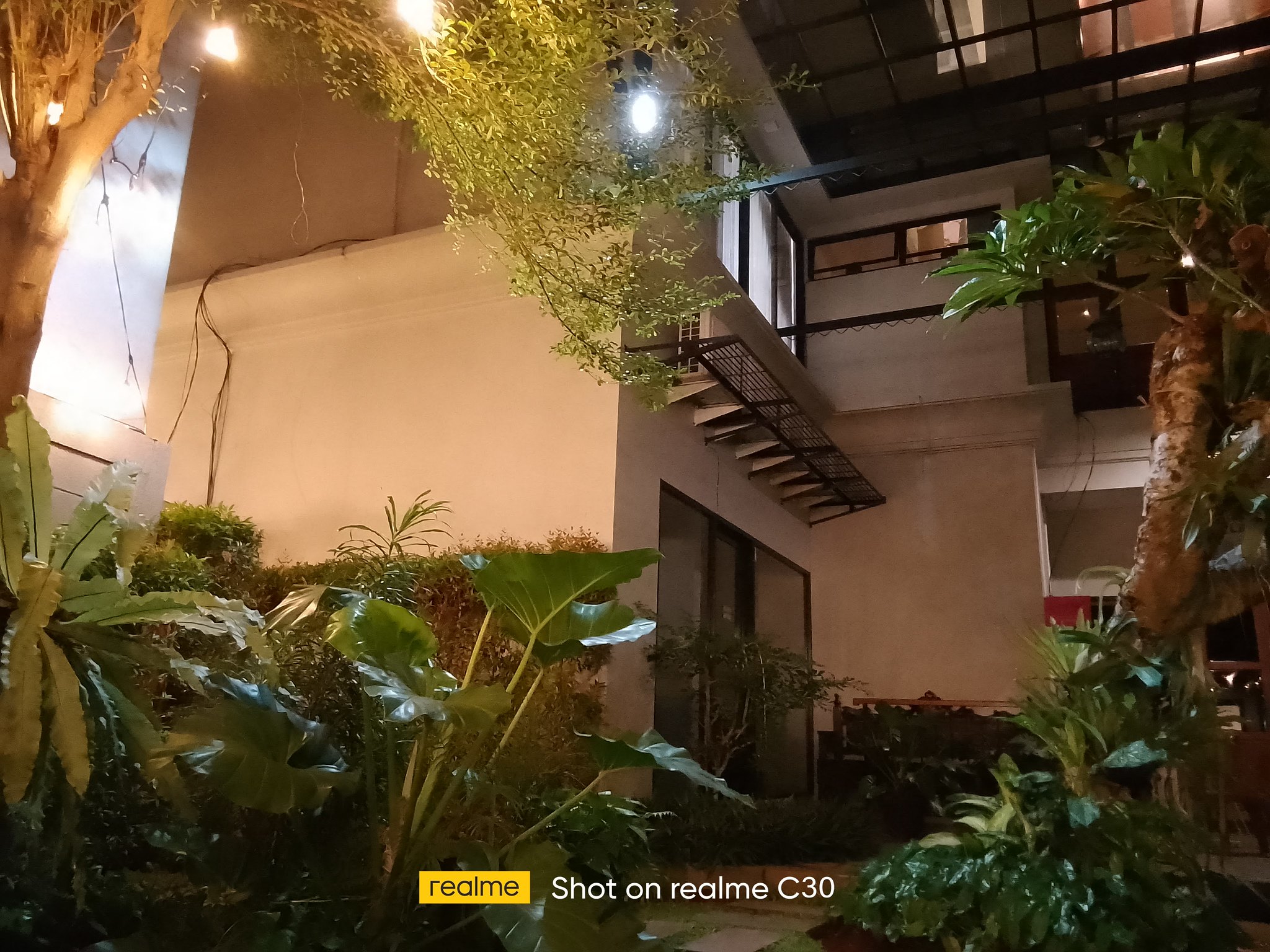 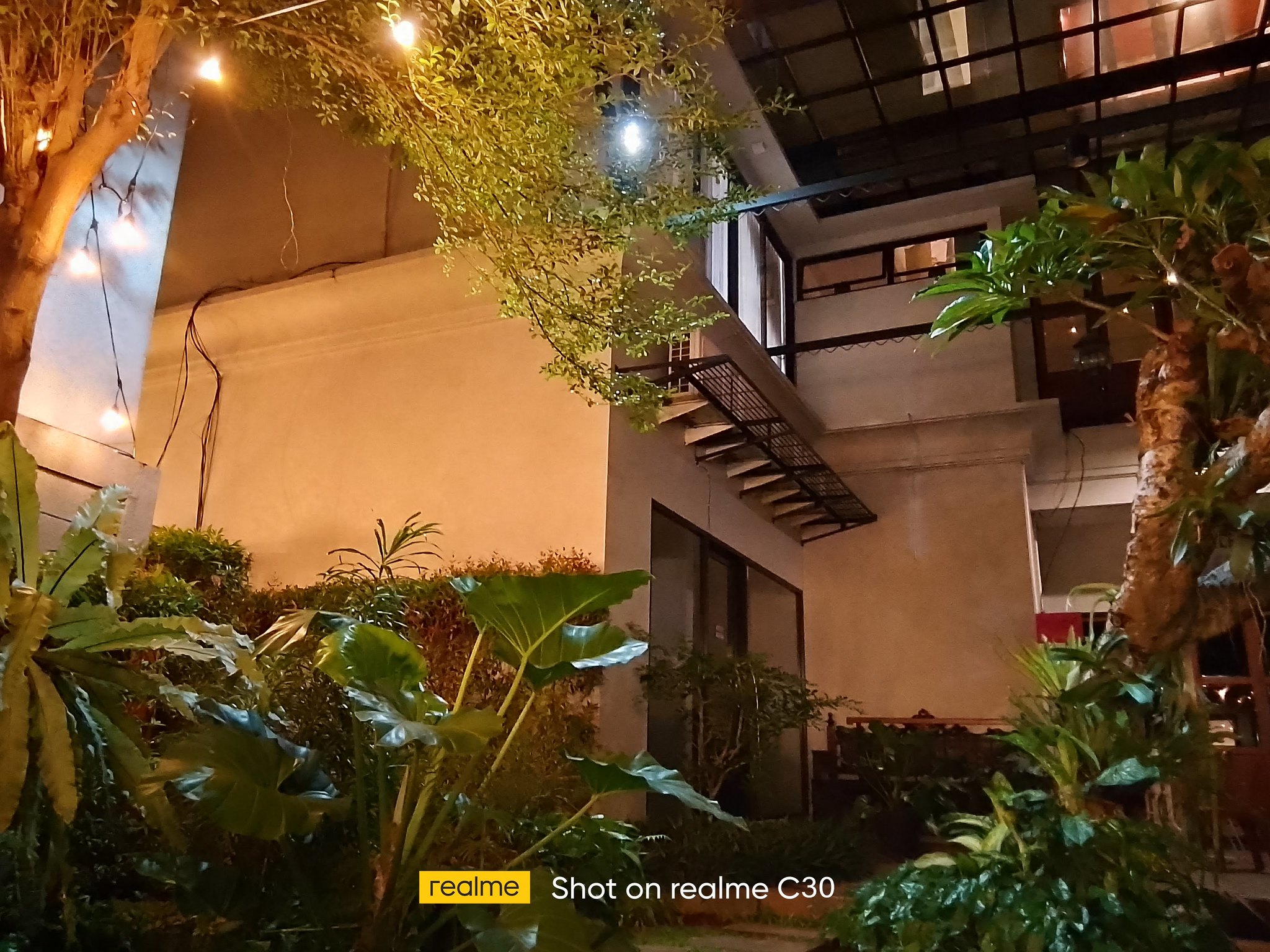 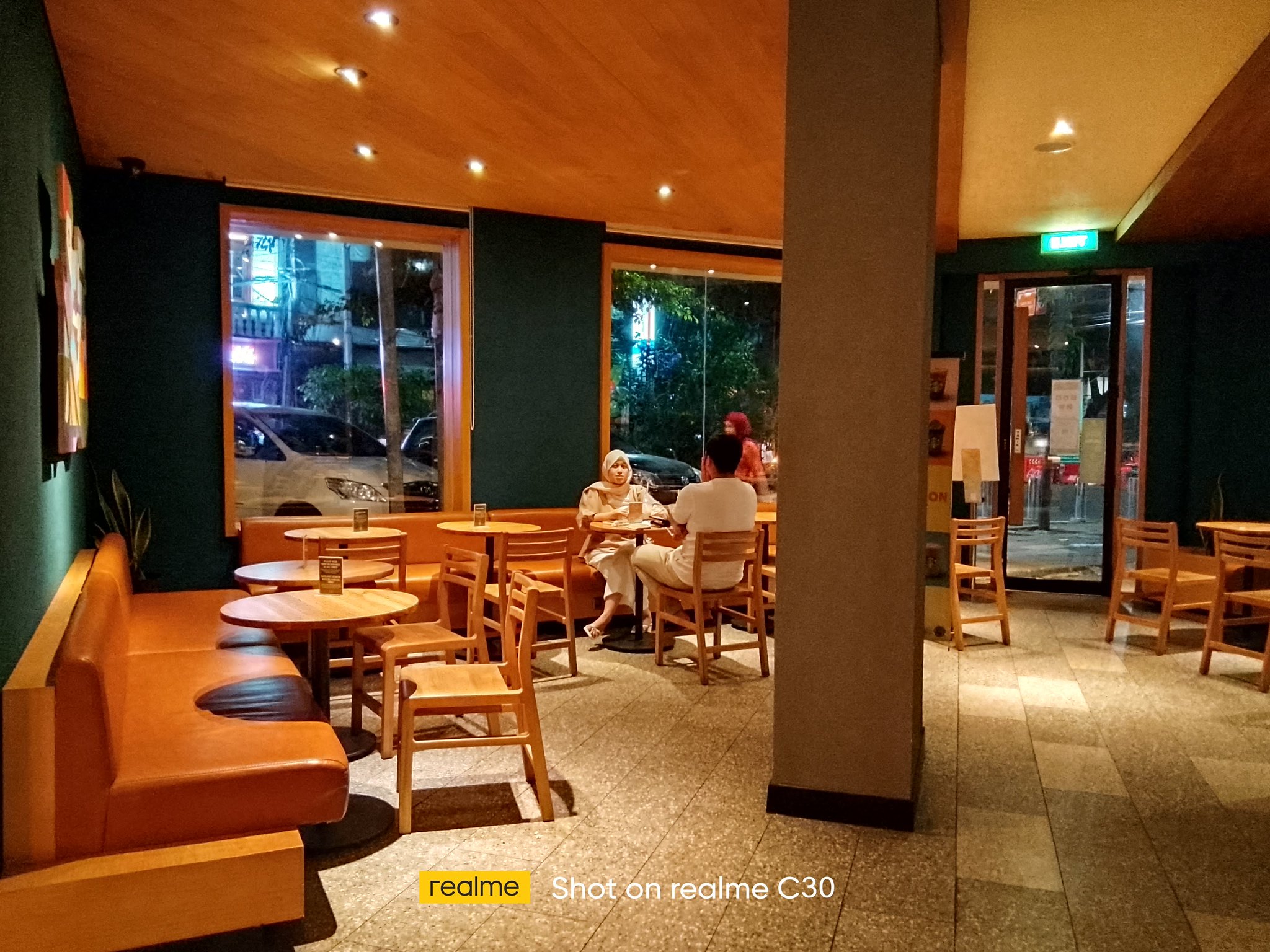 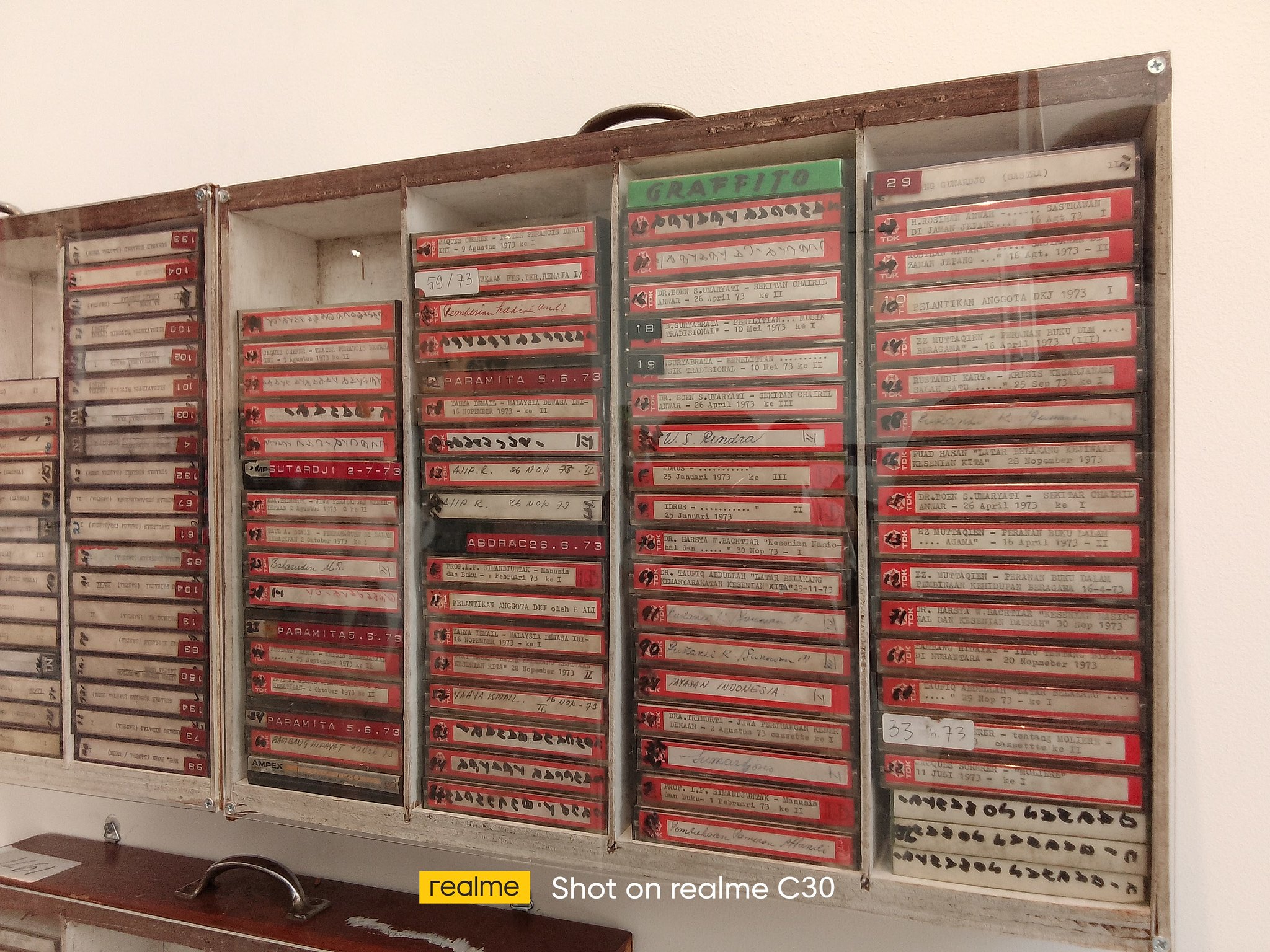 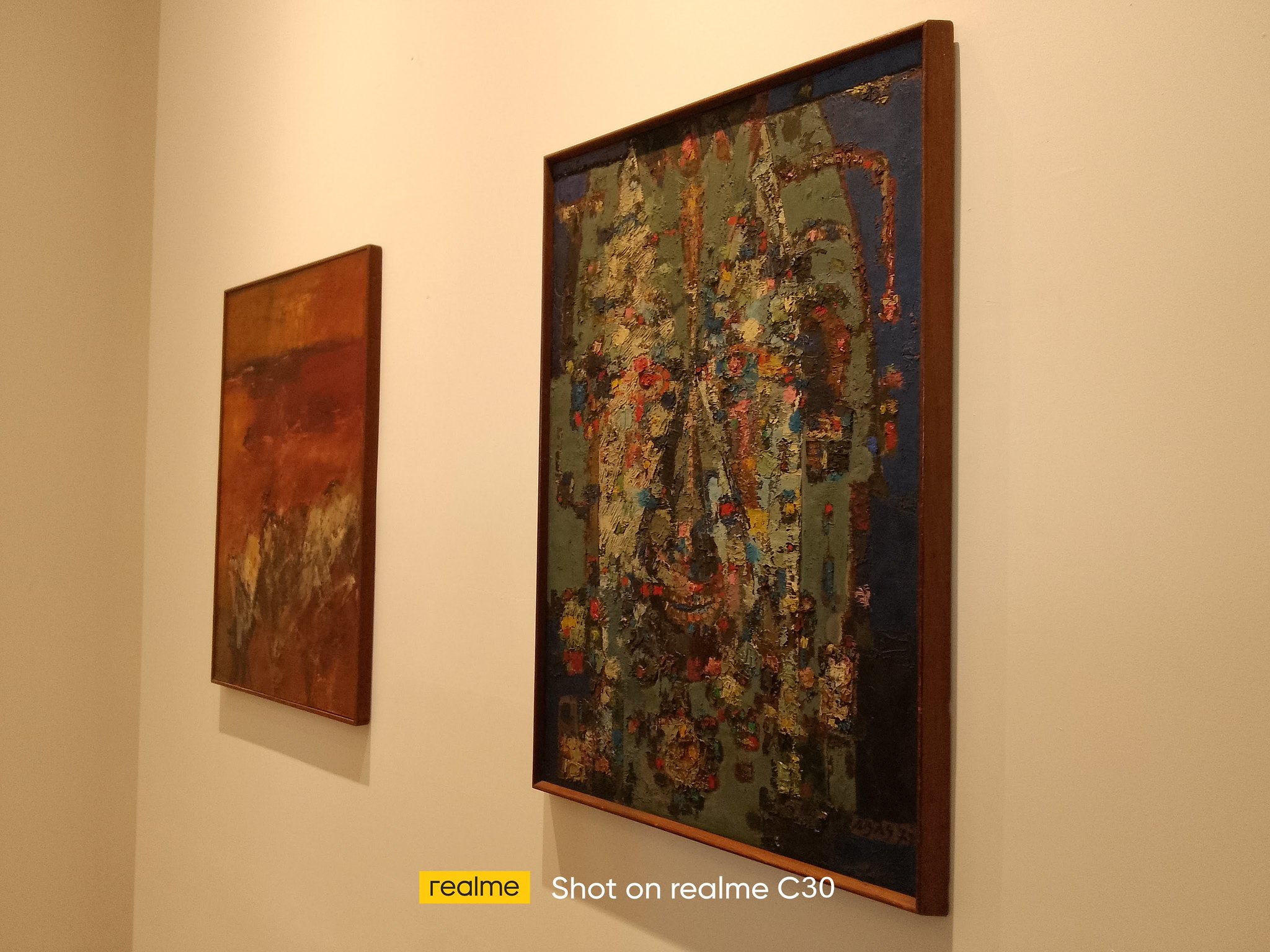 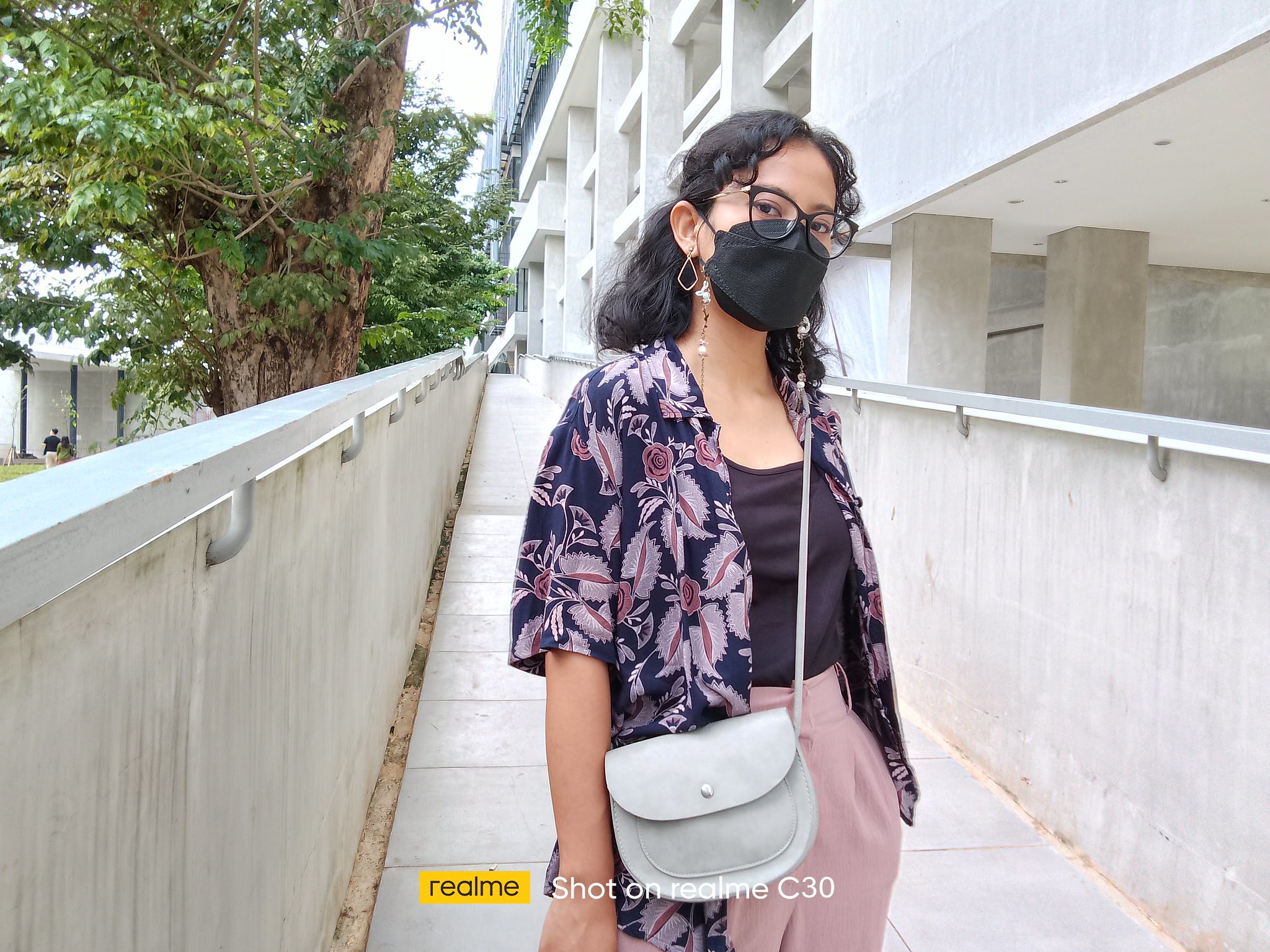 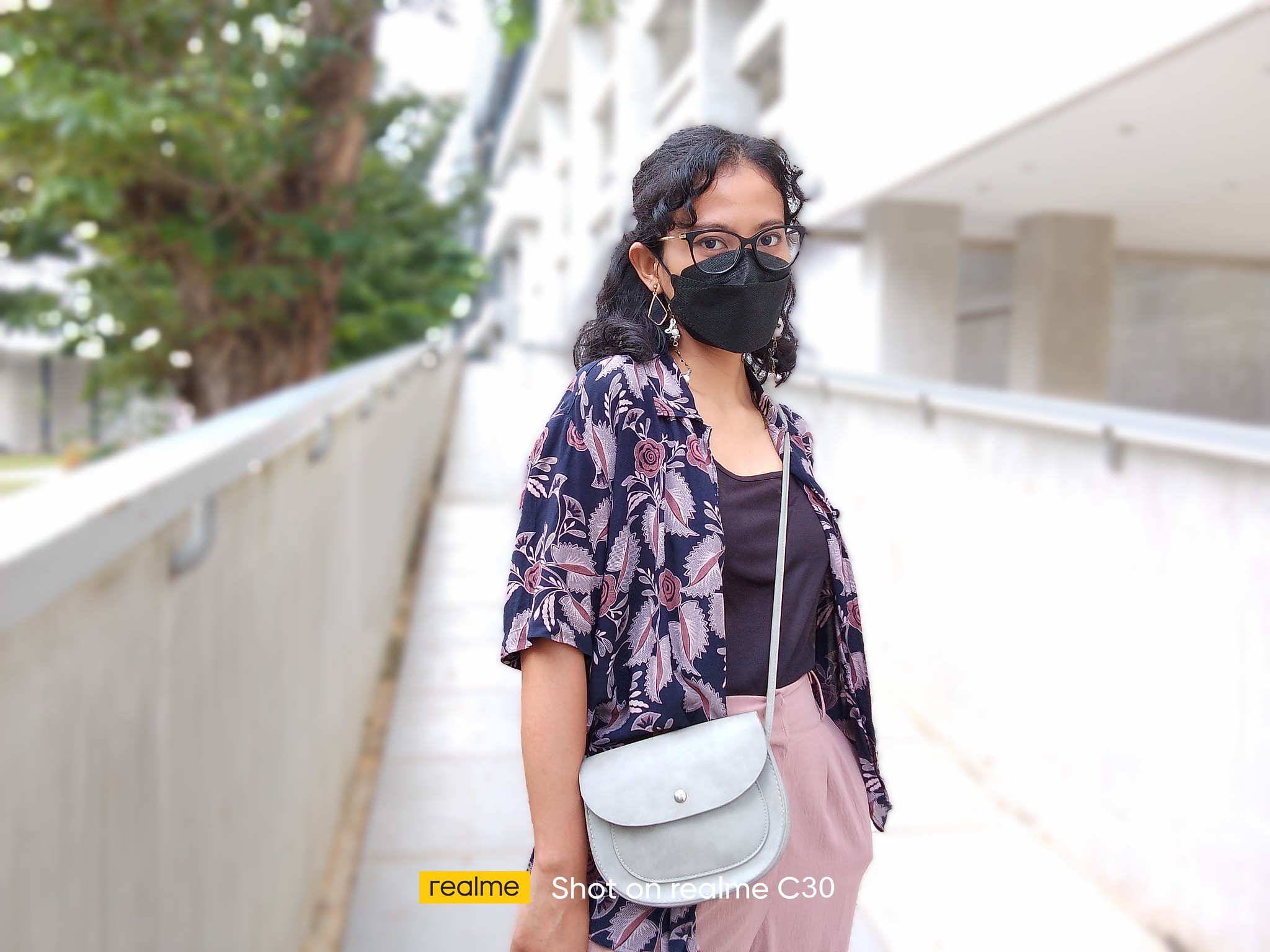 As can be seen above, the catch from the front camera also looks smooth. And because the resolution is a bit low, video recording from the front camera of the realme C30 can only be a maximum of 720p 30fps (while the rear camera is up to 1080p 30fps). Of course, there is no EIS yet, so you have to use additional tools or make sure your hand movement is stable enough.

This smartphone runs a simpler version of Android, with a realme UI R Edition based on Android 11. There are not many extra features embedded, not even given the option of a widget to display on the front page. But don’t worry, essential features such as screen recording, gesture options and USB OTG are still there.

As well as the face unlock option as a substitute for the PIN and password input method, considering that the Realme C30 is not yet equipped with a fingerprint sensor. The mono speaker at the bottom is quite loud, although the output sounds a bit thin. At least it’s suitable for playing content like podcasts, and of course there are other options like using wired or wireless earphones.

The split screen option also doesn’t exist in the realme C30, so you can’t take advantage of the large screen to run two applications. Plus, there’s only a small amount of bloatware, so it doesn’t take up too much internal storage capacity. There is also the option of microSD card expansion with a dedicated slot, up to 1TB capacity. No need to worry about running out of memory too quickly.

One of the main selling points of the realme C30 apart from the design, is the selection of the chipset and its complements. Using the Unisoc Tiger T612 octa-core 12nm chip, this chipset brings two fast Cortex-A75 CPU cores in its class. Coupled with the type of storage UFS 2.2, where many other series are still using eMMC.

With this chip, the realme C30 doesn’t really need to bring a simpler interface. But there’s nothing wrong with that, so that the performance can stay fast in the long term and not burden the RAM capacity of only 2GB. Opening and closing the application feels quite rushed, the application reload speed (due to RAM limitations) is also helped by the chipset.

If you really want more memory, the 4+64GB option is also available. How about when used to play games? When running Pokemon Unite, the default graphics settings are medium – high, and quite stable in the range of 58-60 fps, aka very good. It also feels like it will still be able to play heavier games, as long as it’s okay with a lower fps value or low graphics settings.

Bringing simple specifications and a chipset that is already quite power efficient, of course it will be very fitting if the Realme C30 is paired with a large battery capacity. With a 5,000 mAh battery, the realme C30 can easily be used for up to two full days for simple uses such as social media and messaging.

Because for smartphones in its class, those two activities are the most done, right? Apart from watching videos via platforms like YouTube and Netflix, which makes it possible to last at least a full day. What needs to be understood, realme C30 still uses a micro-USB port and does not support fast charging. So that the charging can reach three hours.

realme C30 comes with the right mix for a million smartphones. While a smartphone in its class can provide features such as a large screen and long battery life, this smartphone provides other advantages such as fast performance and a stylish design. Also a body that feels solid, gives it a sense of security.

The camera shots are not the best. Likewise with the number of features brought through the simple version of realme UI. However, this way, the smartphone is not burdened, and the performance can be maintained for a long time of use. Overall, realme C30 can be the best choice at a price of USD $92.

The price is for the basic variant with 2+32GB memory, yes. You can start buying them at the first flash sale which will take place July 7-14 2022 at realme.com. Later it will also present the option of a more spacious realme C30 variant which has 4 + 64GB memory, which will be priced at USD $118.