In early March 2022, realme made a surprise by introducing the world’s fastest smartphone battery charging technology, 150W. Yes! This charging technology was introduced by realme at the 2022 Mobile World Congress (MWC) event in Barcelona.

Yes! Finally, realme Fans can feel fully filling the smartphone in a “super short” time. As claimed by realme, this 150W fast charging technology can charge the realme GT Neo 3 battery up to 50% in 5 minutes.

realme GT Neo 3, both the 150W and 80W variants are sold in a predominately black packaging box. This of course reminds us of the packaging box of the GT 2 Pro realm which was launched on the market in March 2022.

The packaging box says “GT Neo 3” in silver. This is a 5G smartphone that is again being offered by realme for consumers. realme also lists the fast charging technology, chipset and screen processor as well as the camera sensor used on the back of the box.

Not to forget, Realme also lists the RAM and ROM capacity of the realme GT Neo 3 and the color of the device. Since the device we are reviewing is the 80W variant, the RAM is 8GB and the internal storage is 256GB (the 150W variant has 12GB RAM + 256GB ROM). Meanwhile, the color is Nitro Blue.

When the packaging box is opened, we will find a white box with the words “Hey, welcome to realme family”. The box contains a user manual sheet and guarantee card. Meanwhile, you can find the smartphone unit under the white box.

As already mentioned, the realme GT Neo 3 unit that we are reviewing is the Nitro Blue color. Another color marketed by Realme is Sprint White. realme also provides a white data/charging cable, SIM ejector, transparent softcase and 80W SuperDart charger head in the box.

Now, it’s time for us to directly hold the realme GT Neo 3 ! Yes! This smartphone has dimensions of 163.3 mm x 75.6 mm x 8.2 mm and weighs 188 grams. Having such dimensions and weight, is it comfortable to put in your trouser pocket? The answer is convenient! And also comfortable when held with one hand.

the realme GT Neo 3 reviewed by Alomaki is the Nitro Blue color. Another color choice marketed is Sprint White. Meanwhile, when it comes to design matters, Realme packs the GT Neo 3 with a Matte AG Glass touch.

On the back of the device, Realme places three lenses in a square module that is so striking. The main lens is placed at the top, while the other two lenses are placed parallel. The dual LED flash is placed just below the main camera.

Inside the square-shaped module that houses the three rear cameras, Realme also embeds the words “50MP MATRIX DIS CAMERA”. The rear design of this smartphone is also enhanced by two white lines which symbolize the “Racing Strip Design”. Yes! realme GT Neo 3 does come with the slogan “NEO Speed ​​Awakens”.

Inspired by racing tracks, the GT Neo 3’s design truly embodies performance and speed. Meanwhile, Racing Stripe Design shows courage in challenging and pursuing while evoking the spirit of “Dare to Leap” which is synonymous with the nature of youth.

One thing that is also the main attraction of this smartphone is the adopted screen panel. realme packs GT Neo 3 with a 6.7-inch AMOLED display panel. The resolution offered is FullHD+, aka 2412 x 1080 pixels with a refresh rate of 120Hz. The screen of this smartphone is also protected with Corning Gorilla Glass 5.

realme also reduced the width of the chin on the GT Neo 3 screen to 2.37 mm, as well as presenting a better overall screen display. In addition, the screen display has also increased from conventional 8-bit to 10-bit, which presents 64 types of colors. The punch-hole for the front camera is at the top center of the screen.

realme GT Neo 3 comes as a middle to upper class smartphone. So, those of you who are interested in owning this smartphone will be spoiled by the speed of the Dimensity 8100 chipset from MediaTek. In addition, this chipset also has 5G technology.

For those of you who know, Dimensity 8100 is a chipset designed by MediaTek with 5nm TSMC fabrication. The CPU architecture installed in this chipset is Octa-core, consisting of 4 Arm Cortex-A78 cores with a clock speed of 2.85GHz and 4 Cortex-A55 cores which have a clock speed of up to 2.0GHz.

Intrigued by this, Alomaki also benchmarked the realme GT Neo 3 using three different applications, namely AnTuTu 8.3.4, 3D Mark 2.2 and Geekbench 5. What were the results like? You can see directly through the screenshot below.

realme GT Neo 3 is also equipped with a Dedicated Display Processor. This processor supports interpolating frames that can reach high frames. GT Neo 3 predicts the movement trajectory of objects on the screen through a sophisticated chip and algorithm, by adding a motion compensation frame between the two frames for smoother image visualization.

Realme also said that this processor is claimed to be able to reduce power consumption. The Dedicated Display Processor will modify the image provided by the GPU and display it on the screen, reducing GPU load and reducing smartphone battery power consumption.

Now! For those of you who like to play games using smartphones, Realme has equipped GT Neo 3 with GT Mode 3.0. The GT Mode upgrade is just one click away which can provide the best performance in all activities, especially when playing games.

After GT Mode 3.0 is active, the refresh rate and touch sampling rate are automatically fully increased. It’s enough to feel and this will present a smoother and more responsive gaming experience. Yes! By activating this mode, you can play games with a refresh rate of 90Hz to 120Hz.

As mentioned, the realme GT Neo 3 reviewed by Alomaki is a 80W SuperDart Charge charging variant with a 5,000 mAh battery. Having such a battery capacity, this smartphone can be used for two days with normal use plus playing games occasionally.

realme also incorporates the Dual Charge Pump Parallel Architecture technology which can increase the charging conversion rate up to 98.5% while at the same time dissipating heat. There is also Battery Sense Voltmeter technology to detect battery cell voltages, as well as adjust the proper charge during the charging process.

Then, is it true what Realme says that this smartphone user can fully charge the battery in a short time? Yes! Intrigued by these claims, Alomaki proves it directly that charging up to 50% only takes 18 minutes. This is of course thanks to the 80W SuperDart Charge.

When the GT 3 Neo realm is launched to play games for a long time, the chipset in this smartphone also does not cause a feeling of heat, especially on the back panel. Alomaki considers this to be reasonable because the realme GT Neo 3 has a cooling system using stainless steel VC measuring 4,129 mm².

realme has also equipped a cooling system with an area of ​​up to 39,606 mm². GT Neo 3 adopts the strongest thermal conductivity material and nine-layer heat dissipation structure. Compared to GT Neo 2, the cooling system of GT Neo 3 has increased by 120.86%, so it can reduce heat up to 19 degrees Celsius.

Another major highlight that makes the realme GT Neo 3 worthy of competing in the upper middle class smartphone market is the embedded camera support. As already mentioned, Realme provides GT Neo 3 with three cameras on the back.

Now! realme is so confident to immerse the 50 MP main camera into this Rp. 6 million smartphone. Not only that, the main camera also uses the IMX766 sensor from Sony and is also equipped with Optical Image Stabilization (OIS) support.

realme also boasts that the combination of ProLight Imaging technology and the Sony IMX766 sensor can provide clear and bright photos taken in low light conditions. The main camera has an aperture of f/1.8 and is supported by a super large sensor size of 1/1.56” and a single-pixel area of ​​1.0μm.

realme also managed to increase the shooting speed with night mode by 71.4% compared to the previous generation. This is thanks to the Nightscape Accelerator which was developed by realme. Previously, Night Mode took 2-4 seconds to capture a photo object, but now it only takes 0.8 seconds.

For the need to take pictures, Realme also complements the existing camera in the realme GT Neo 3 with a series of interesting features in it. Of course, besides the Night Mode feature, you will also be spoiled with Street Photography, Portrait and 50MP features.

Like several other realme smartphone series, realme also complements the realme GT Neo 3 with professional shooting features, which you can access via the Pro feature. Apart from that, you can also find Panorama, Ultra Macro and Text Scanner features.

Example of a photo shot using the realme GT Neo 3 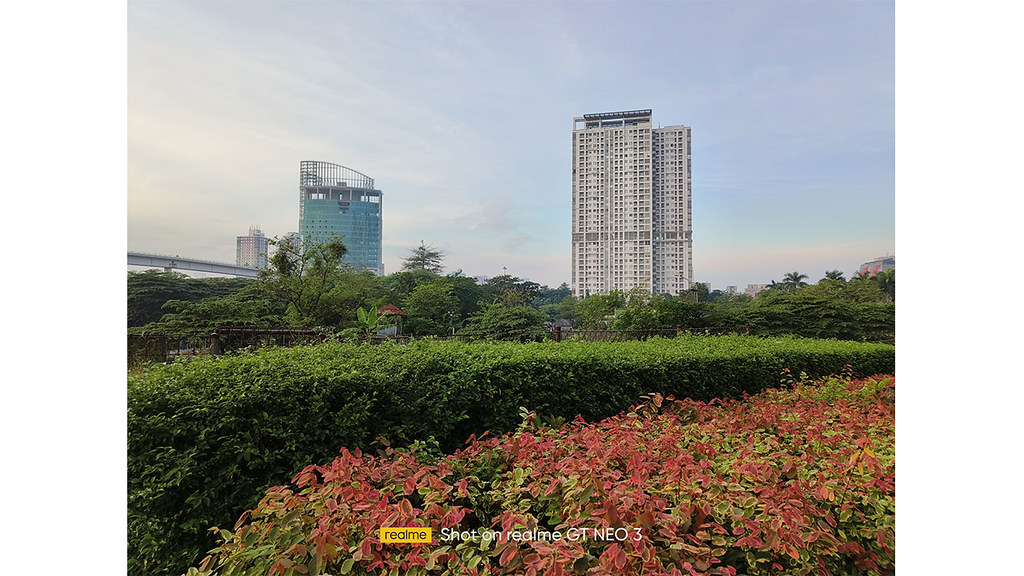 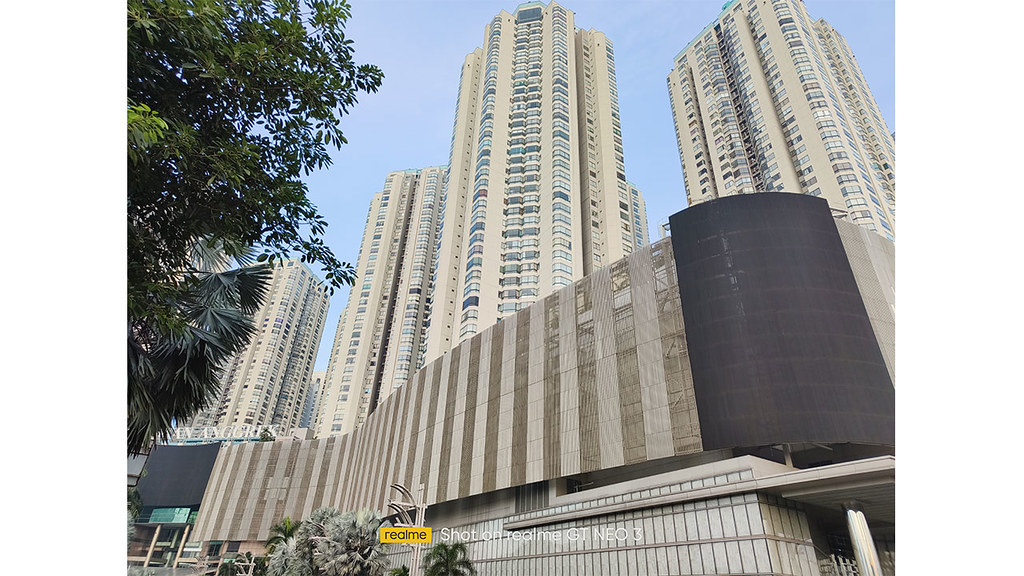 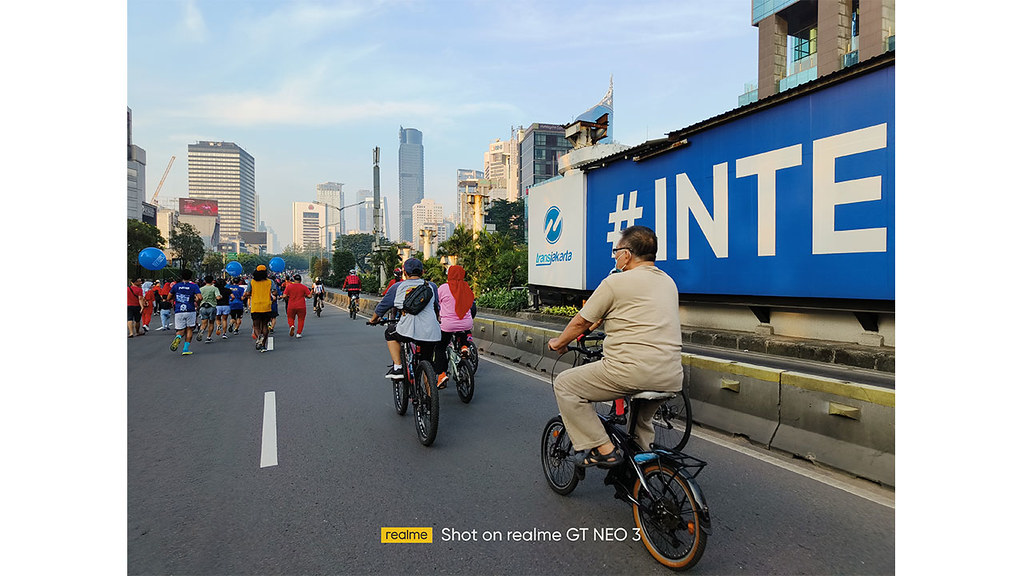 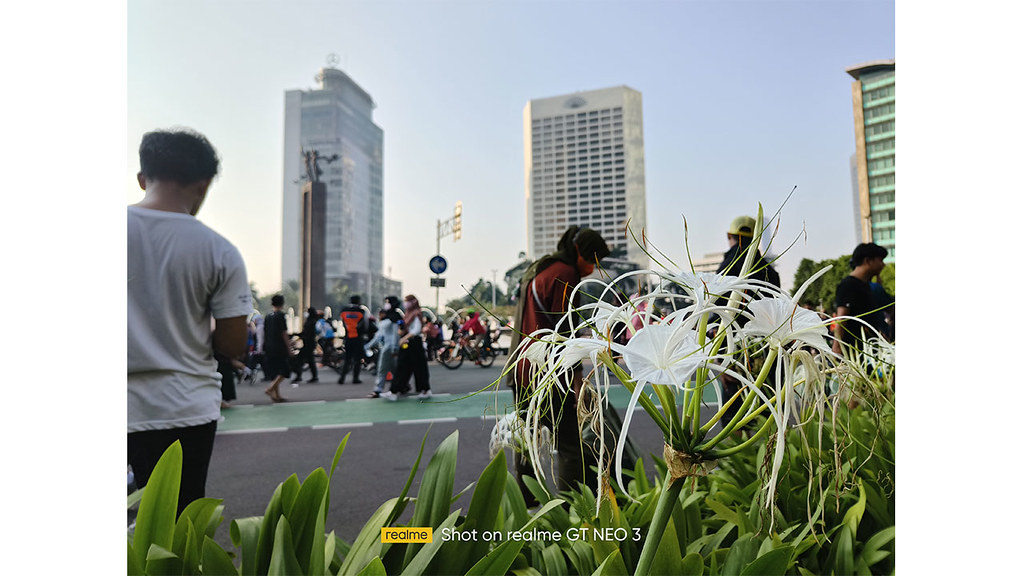 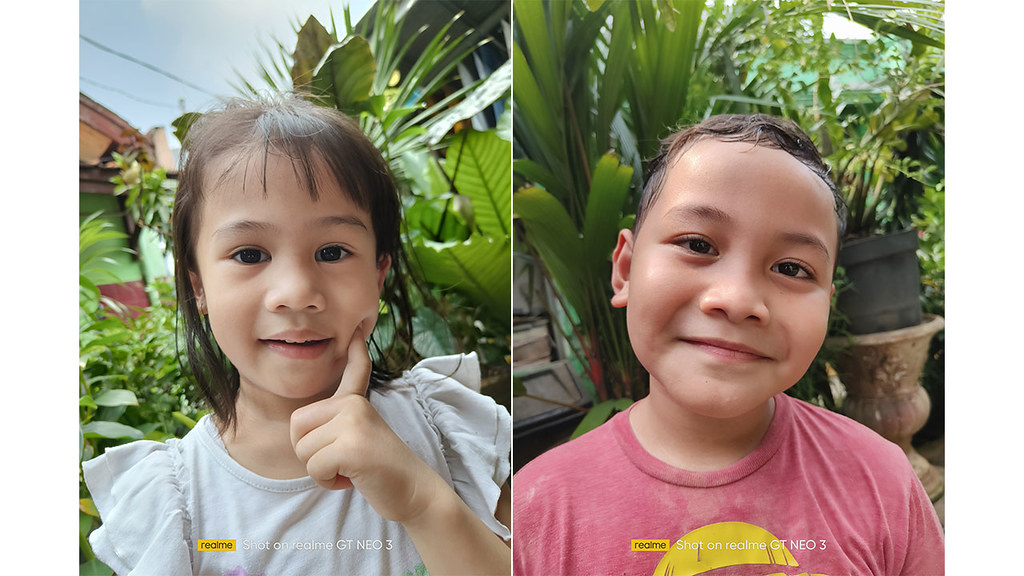 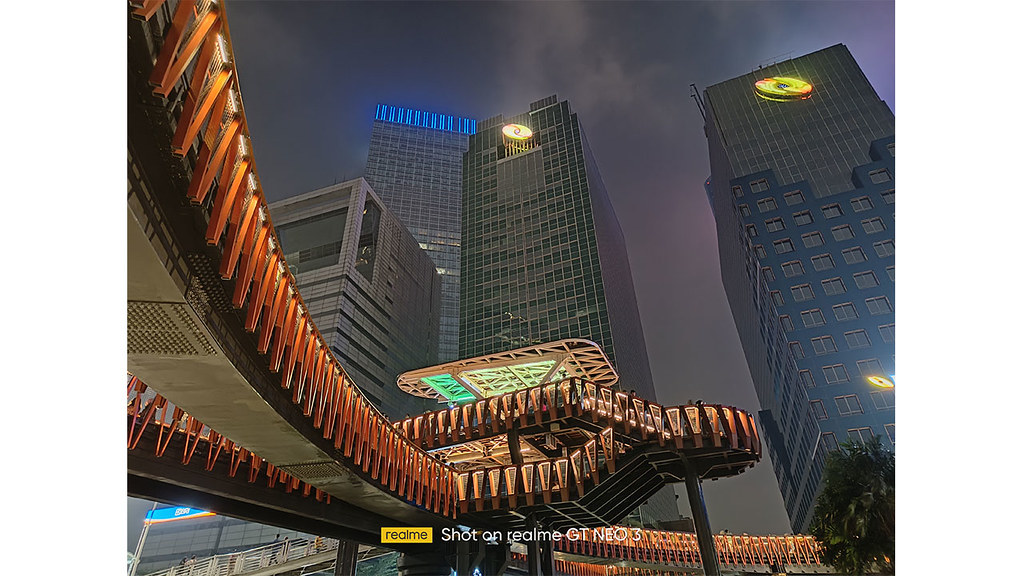 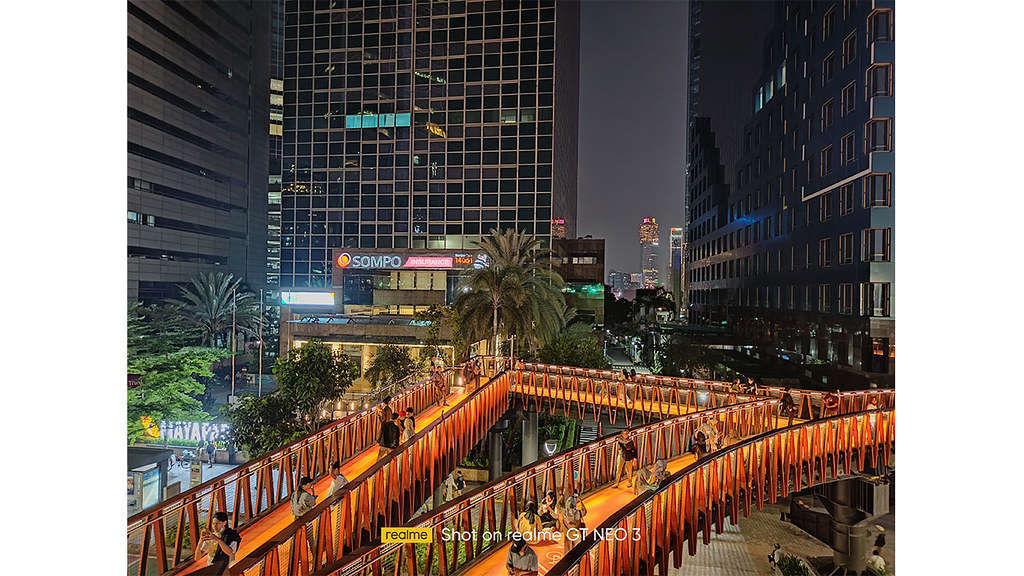 If you are interested in using the realme GT Neo 3 to record videos, this smartphone can produce videos with a resolution of up to 4K and a frame rate of @ 30 fps or @ 60 fps. You can also use this smartphone to make Slo-Mo and Time-Lapse videos.

realme is a smartphone brand that is keen to produce new devices. Now, we as gadget fans are again surprised by Realme, which presents the realme GT Neo 3 to the market. This upper middle class smartphone brings some interesting things.

First, carrying the tagline “NEO Speed ​​Awakens”, this smartphone has been fed by “super fast” charging. Alomaki feels that charging the 5,000 mAh battery inside the body of the realme GT Neo 3 to 50% percent only takes 18 minutes. Yes! realme GT Neo 3 which Alomaki review is the 80W SuperDart Charge variant.

Not only that, another attraction offered by the realme GT Neo 3 is the embedded chipset support. This smartphone is powered by the Dimensity 8100 SoC which carries 5G support. When benchmarked using the AnTuTu 8.3.4 application, the score reached 671,160 points.

realme GT Neo 3 with 80W SuperDart Charge charging which is priced at USD $437.5 also has an attractive design. The screen panel is AMOLED with a size of 6.7 inches FullHD + with a refresh rate of 120Hz. Meanwhile, the rear is inspired by racing tracks, which truly represents performance and speed.

For the photography and videography sector, Realme is also not kidding. realme GT Neo 3 is armed with a 50 MP main camera and interestingly it has embedded the flagship IMX766 sensor from Sony and is supported by OIS support. Therefore, this smartphone is worthy to accompany you to take pictures of the beautiful night.