Every year, the moment I have the opportunity to review the best foldable smartphone from Samsung I always look forward to. Through the Galaxy Z Fold4 5G, essential improvements are presented that are not visible from the outside. Except the new color options.

New camera sensor, more powerful screen, more power efficient chipset are some of the benefits that I really feel. If last year that part could still be “beaten” with the Galaxy S Series, this time it can be considered equal. That is, when you choose the Galaxy Z Fold4 5G, you can still experience the capabilities of this year’s all-rounder flagship.

Improved from the previous generation, in terms of dimensions, the Galaxy Z Fold4 5G is made a little thinner and lighter at 263 grams—not much heavier than the iPhone 14 Pro Max at 240 grams. Use Armor Aluminum frame and Gorilla Glass Victus+ glass surface front and back.

The unit I’m holding is Graygreen, looks like a less intense green and a lot of people are interested in this new color option. The surface of the body is not too slippery, and fingerprints can be disguised enough. Although the rear camera module is quite prominent, so you have to be more careful to place it on the table so it doesn’t scratch.

IPX8 certification in my opinion is quite important to be present on the Galaxy Z Fold4 5G. For three days of watching concerts for almost a full day, I held this smartphone with sweaty wet hands, so I was ready to capture the moment and check the stage schedule. The weight is not too heavy, including when it goes into the pocket—well, at most the bag will pop out a little.

Another difference that is felt is the folding screen mechanism is more sturdy. The Galaxy Z Fold4 5G also still comes with a separate S Pen stylus—alternatively, there’s at least a package with the S Pen and an integrated case for storing it.

The specifications on paper are more or less the same as the previous series, where there is a 6.2-inch screen on the outside and a 7.6-inch screen on the inside. They both use AMOLED panels and have a refresh rate of up to 120Hz, but in daily use it feels much more pleasant. Well, how come?

First, the screen ratio has been changed to a little more “normal”. The outer screen is made wider, so it is more comfortable to type or access various applications only from the outer screen. While on the inside, the ratio is made more squared, so it’s more suitable for multitasking—although it will display a thicker black border when used for watching content such as movies.

Second, the Ultra Thin Glass material on the main screen also feels harder, so it feels more like touching a conventional screen and will be more comfortable when used with the S Pen. The crease or folds are also a little less. Third, the pixels above the camera under the display are also made denser, so they are more hidden when not in use.

Well, for You who plan to use the Galaxy Z Fold4 5G for a long time, I think it is necessary to add screen protection for the outer screen. Yes, unlike before, Samsung does not provide a default screen protector. And for the use of Flex Mode, the screen will be “exposed” to the surface of the table and others.

Gorilla Glass Victus + used on the front screen and rear body can indeed withstand scratches and potential cracks when dropped. But even so, after two weeks, thin scratches can appear on the screen of the Galaxy Z Fold4 5G.

Through the Galaxy Z Fold4 5G, users can now experience the quality of photography and videography on par with today’s flagships. The reason is that the main and telephoto sensors have been upgraded, you could say they are on par with the Galaxy S22 & S22+. Even more so—because it’s easier to take selfies with the main camera setup.

The main sensor is now 50MP resolution and can capture better details thanks to larger pixels, while the telephoto sensor can provide 3x optical zoom & 30x Space Zoom. The camera on the front screen has a resolution of 10MP, while on the inside it remains an under-display type with 4MP resolution—the camera I rarely use, only when making video calls from the inside screen. It’s so easy to take photos using the main sensor.

When accessing the camera from the external screen, there is a “selfie” button on the top left, which allows you to take selfies with your choice of all three rear camera sensors. If now there is a photo trend with an ultra-wide sensor, through the Galaxy Z Fold4 5G, you can see the preview at once, without having to guess. This feature is very convenient, especially for events such as concerts.

You can also go through the main screen, and you can activate the outer screen (so that the subject being photographed can also see the viewfinder), or split the main screen to preview the captured photo. The camera modes themselves are as complete as any other Samsung flagship, including Director’s View as well as a completely flexible manual mode. For quality, the Galaxy Z Fold4 5G has a camera setup that is quite satisfactory.

Photos in conditions of abundant light can be ascertained quality, with a very wide dynamic range and a fairly fast shutter. When in low-light, taking photos with the main sensor sometimes you don’t need to use night mode, because it can produce bright photos instantly thanks to the sensor which is indeed better than the previous generation.

You can access the complete photo results from the Galaxy Z Fold4 5G camera in the following album. 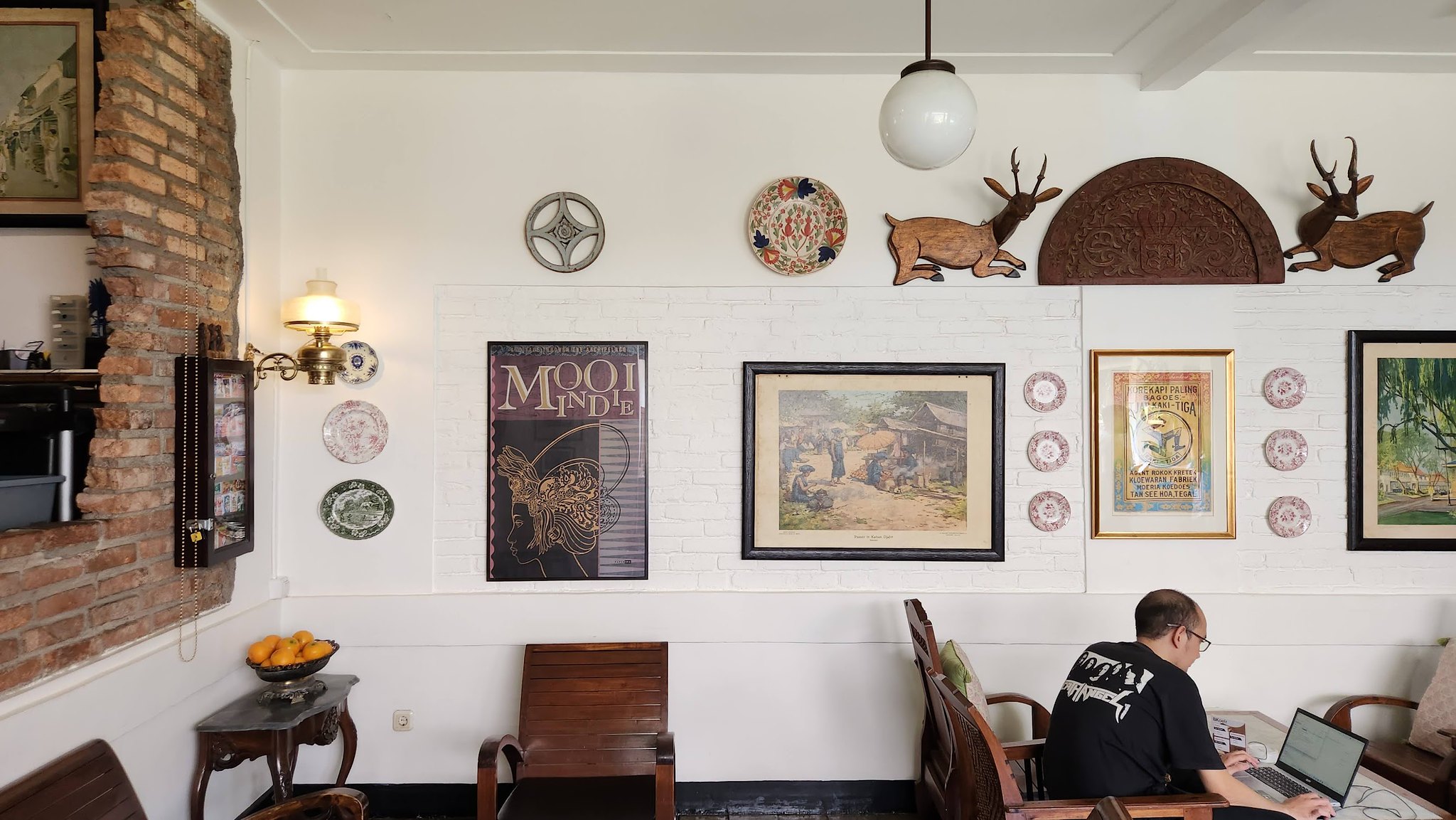 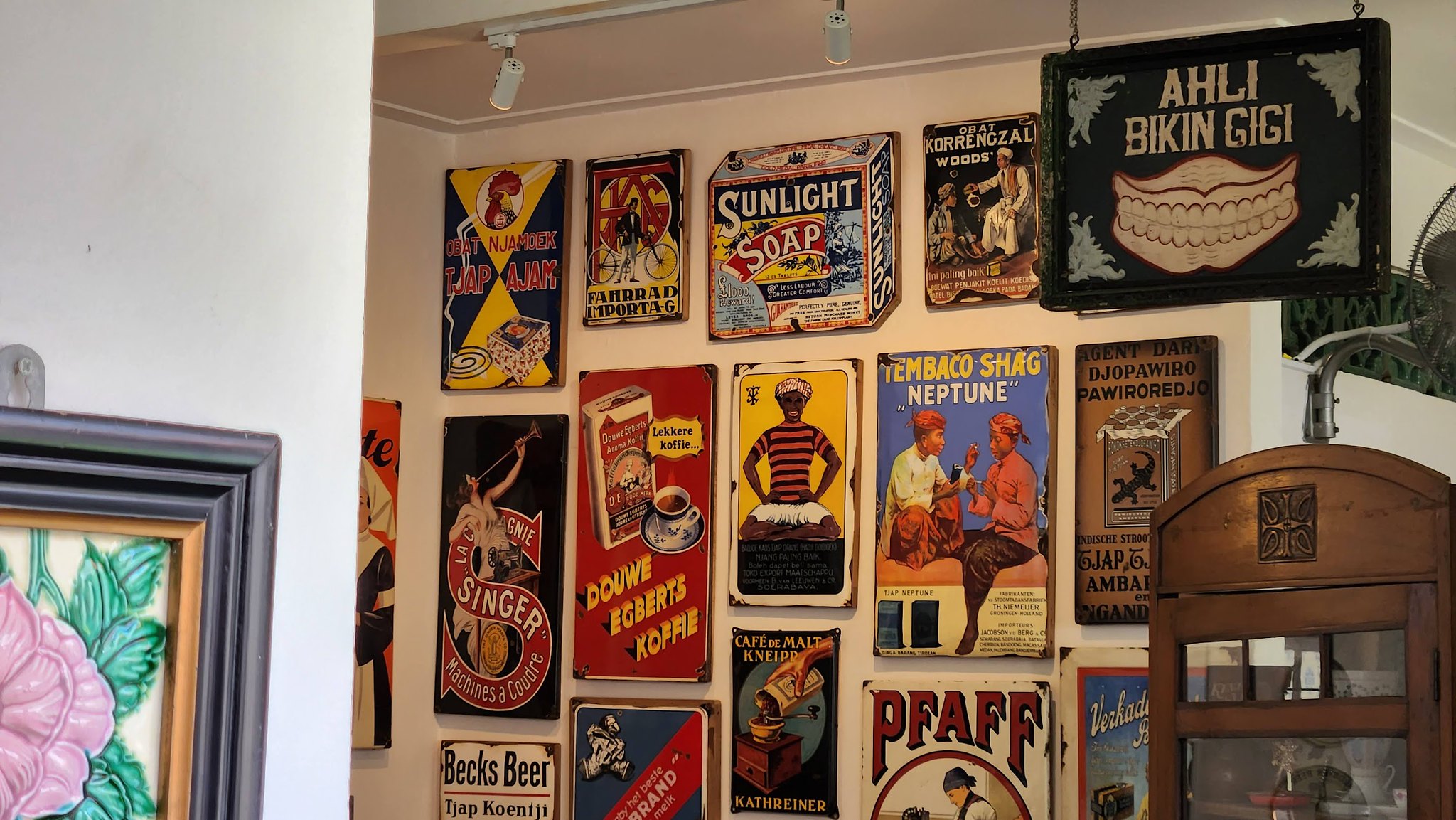 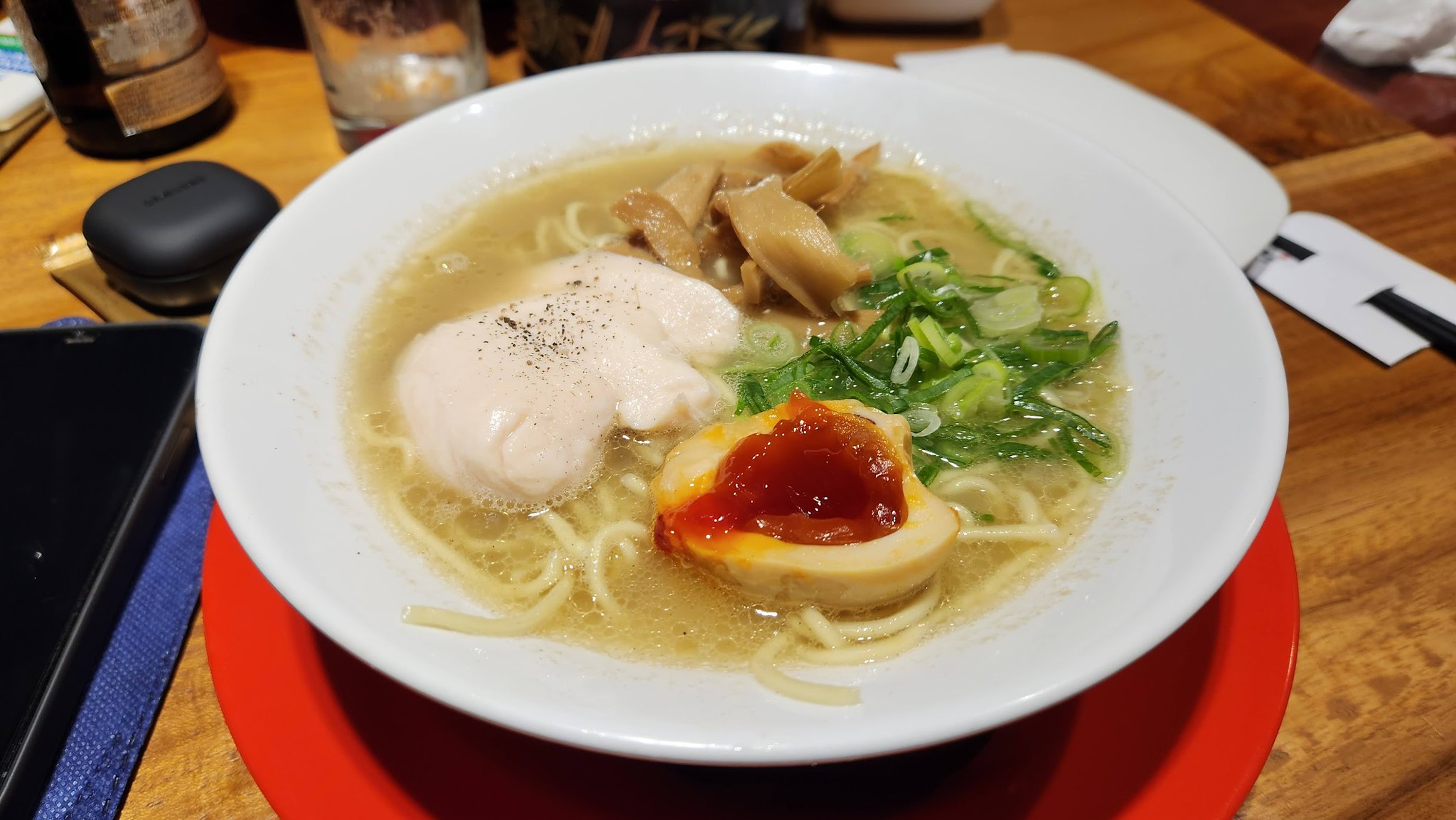 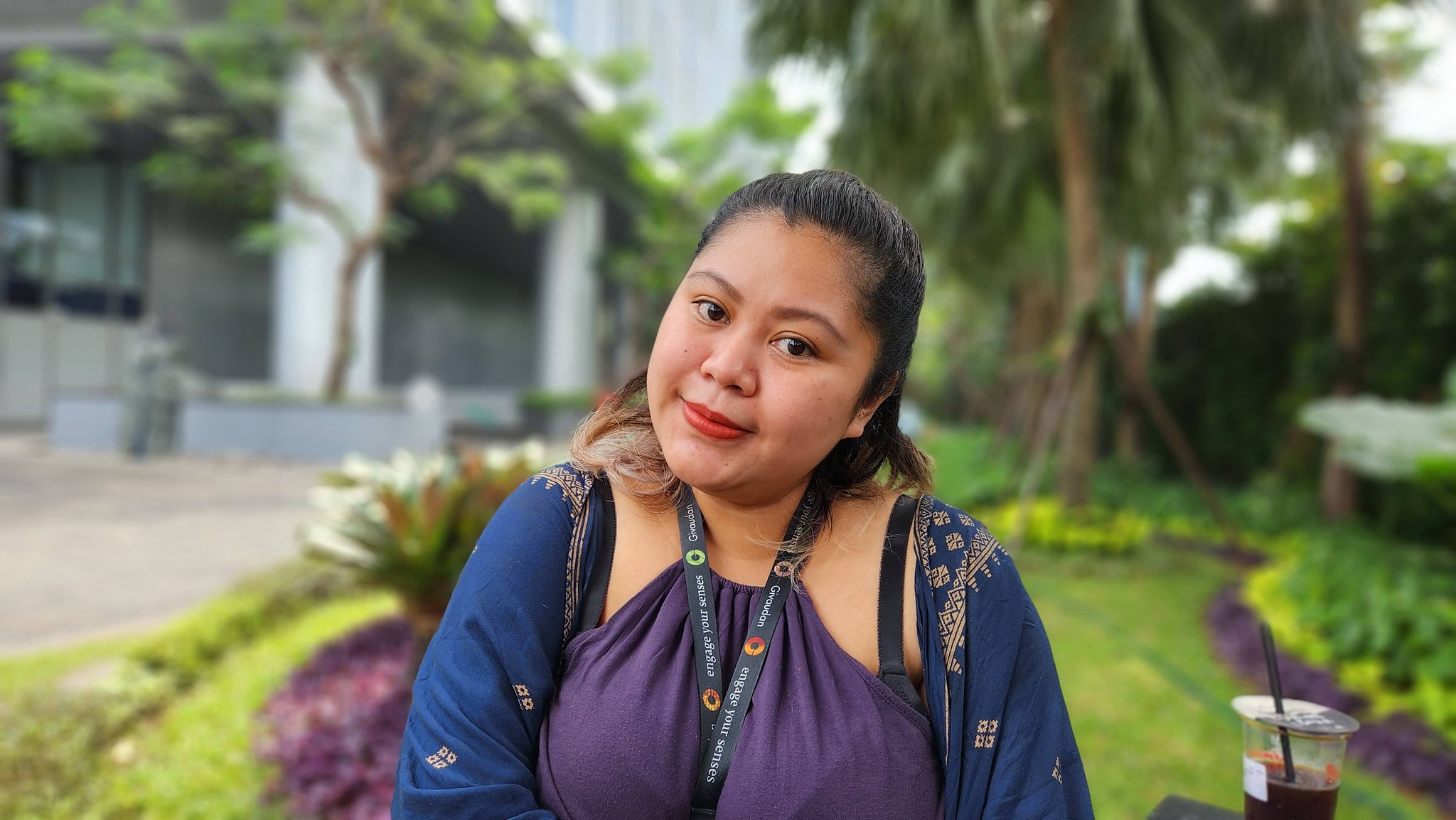 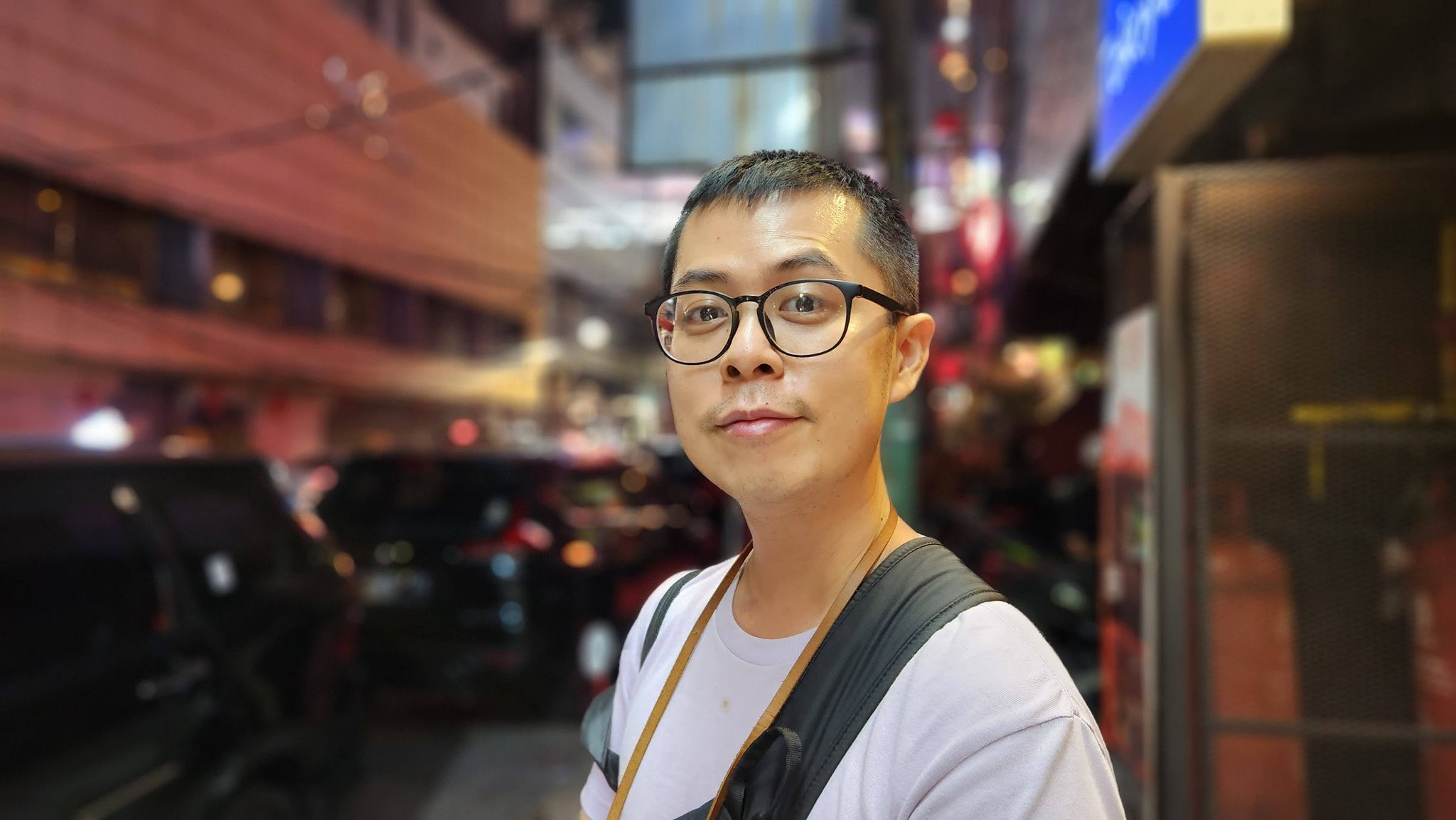 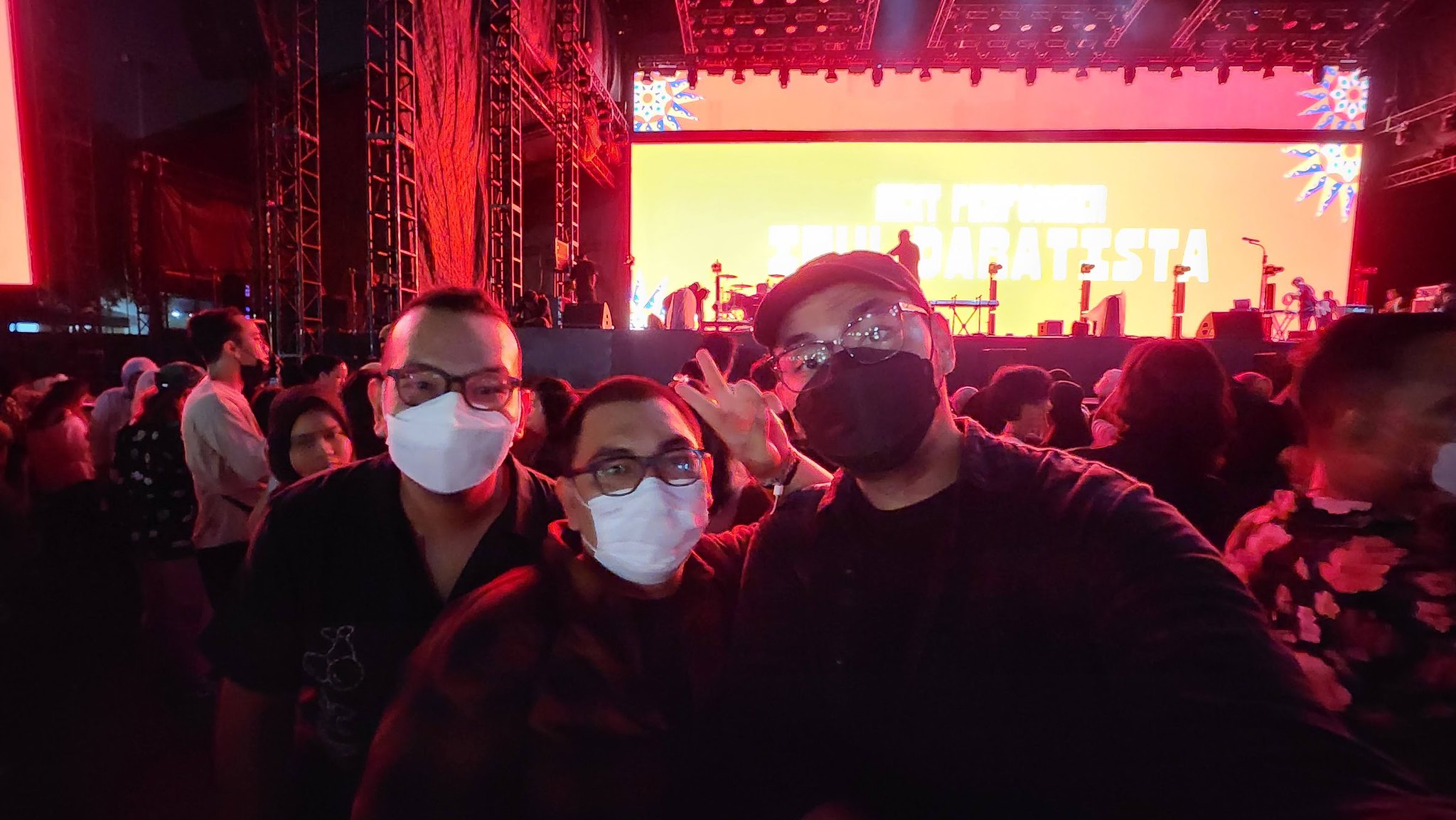 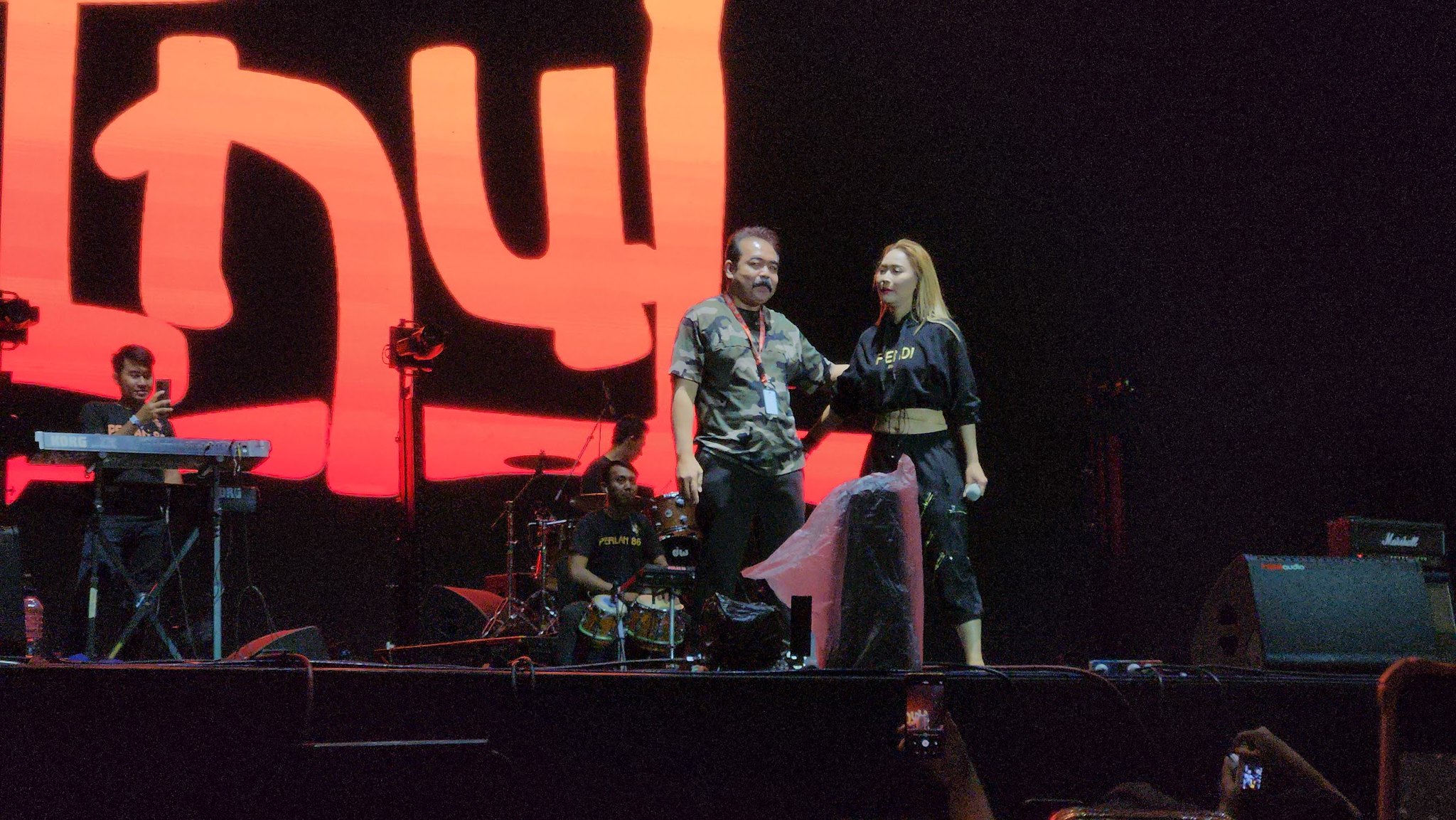 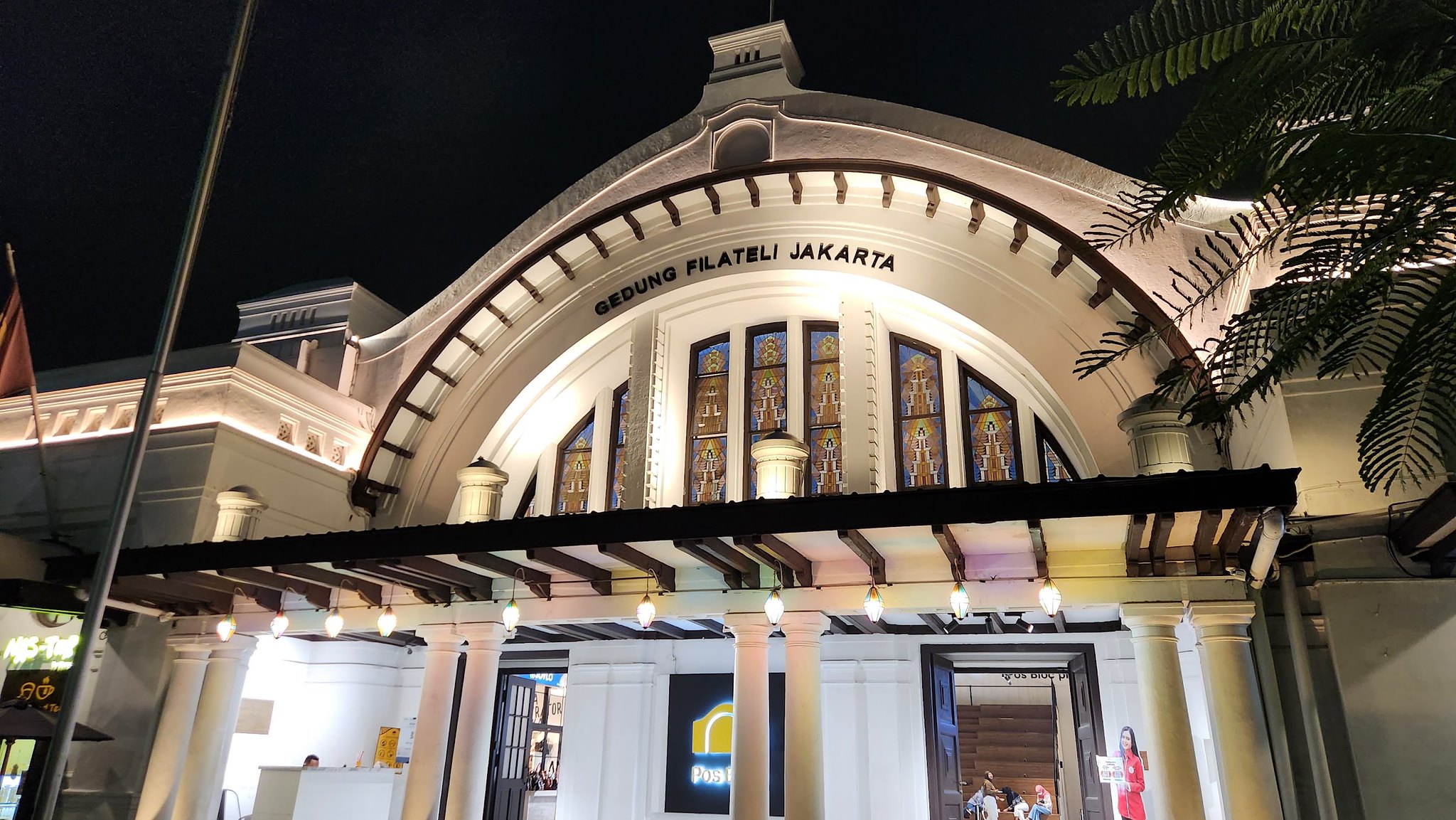 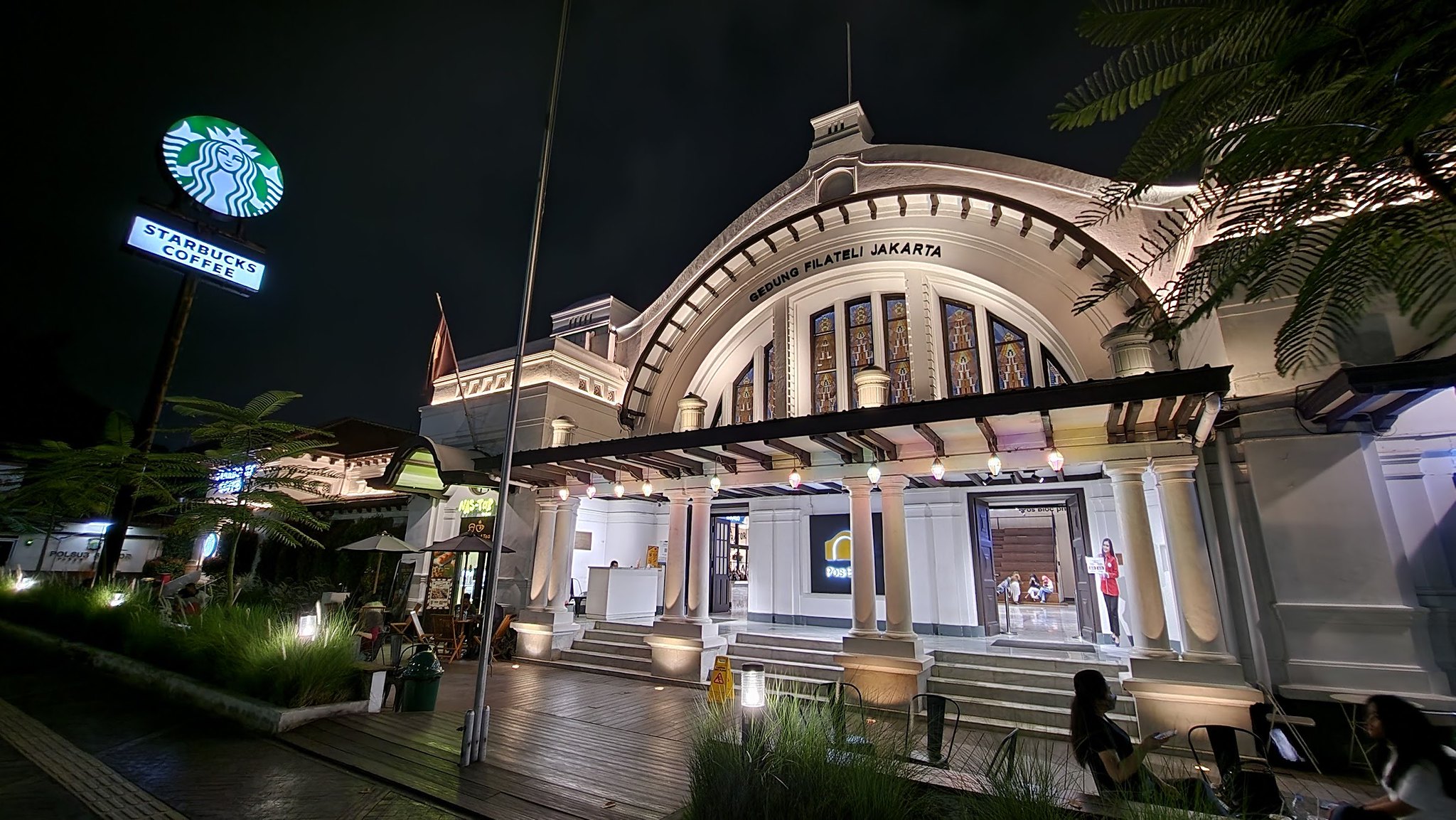 In addition to photography, his videography skills are also quite satisfactory. The main sensor can record video up to 8K 24fps resolution if needed. But as long as you use 4K 30fps resolution, you can switch to all camera sensors—except the under-display camera. I tried it directly to capture the moment at Pestapora yesterday.

I really appreciate the quality of the telephoto sensor, it can provide relatively good video quality even up to 5x zoom, with stable footage and excellent sound quality. It seems that AI intervention is quite high—sometimes when doing 5x zoom, the video remains blurry as if it hasn’t detected an object before finally making the view clearer. It’s very rare, really, when it’s successful, the video can remain very stable even though it’s not from the main sensor.

Maximize productivity even further, One UI 4.1.1 used by the Galaxy Z Fold4 5G is already based on Android 12L—a version of the OS specifically for large screens. Samsung introduced a new Taskbar that is similar to the appearance of Samsung DeX, and the bar really makes it easy to speed up multitasking.

If previously there were only three virtual buttons, now it is more “useful” by displaying a list of favorite applications, the last two applications, menu shortcuts, to shortcuts to run several applications according to preferences (which is called Apps Pair). The rest is more or less the same as before.

What I regret, the appearance of the Instagram application is still often not quite right, both on the outside and inside the screen, both in the default ratio to full screen. It’s not entirely Samsung’s fault, really, but it would be better if it was optimized, considering that not a few Galaxy Z Fold4 5G users will use it for entertainment.

The Samsung DeX option remains present when connected to an external display. Flex Mode can also provide more functions, including applications that are not yet optimized. Regarding entertainment, the quality of the stereo speakers is quite fast and satisfying.

The Samsung Galaxy Z Fold4 5G is equipped with Qualcomm’s best current chipset, the Snapdragon 8+ Gen 1 4nm which is much more power efficient than the non-Plus variant. For performance, although Antutu’s score is not the highest, at least the user experience is very smooth and pleasant. Including when multitasking “high level”.

Naturally, the presence of the Taskbar allows me to access more applications at a time (or run 2-3 applications at once using the main screen). Compared to last year’s series, it actually feels equally smooth, but the body temperature is more awake. It’s no longer easy to heat up, especially when used outside during the day—such as in the outdoor area of ​​a cafe.

The cooler temperature also makes the Galaxy Z Fold4 5G more comfortable when used to play games for a long time, especially when using a satisfying main screen. Of course, 12GB of RAM is also more than enough, and there’s a RAM Plus option of up to 8GB—making it up to 20GB!

It seems that the appearance of the Galaxy Z Fold4 5G in the second half of 2022 is fitting, when Qualcomm is able to optimize the performance of its chipset even further. Making this one multitasking focused device very comfortable to use, with a longer duration of use.

Having a larger form factor than the Flip series, in the previous generation, the Fold version battery does feel more durable. And on the Galaxy Z Fold4 5G, the battery capacity is still exactly the same, which is 4,400 mAh which is divided into two sides of the body. The good news is, you can use this smartphone all day more comfortably.

During the two weeks of use, I didn’t notice any significant difference in battery life when I used the main screen instead of the external screen. On average with the combination of Wi-Fi plus cellular data, the screen-on time I get is in the range of 4-4.5 hours, for a duration of 24 hours of use. This is the same lifespan as conventional flagship smartphones with possibly larger batteries.

The use of the Snapdragon 8+ Gen 1 chipset feels really effective to add to the battery life. The charging process is noticeably faster than the previous generation. From the range of 5%, it can reach 50% in 30 minutes and 100% in the range of 1 hour 20 minutes. Wireless charging & reverse wireless charging? Came in when I forgot to charge my Galaxy Buds 2 Pro .

As I mentioned at the beginning, even though it looks similar from the outside, there are quite a lot of improvements both in terms of software and hardware that are brought through the Galaxy Z Fold4 5G. Although indeed, a number of new features will also be passed down to previous generations. For this reason, it is not mandatory for older series users to upgrade.

But if you are planning to buy a Samsung foldable smartphone for the first time, now is the time. At least at the same price tag, the options are not only the latest iPhones. There is a multifunctional device that is also futuristic, and also far from the word “fragile”.