In the smartphone market, the name TECNO is not very popular when compared to Xiaomi, OPPO, Vivo or Realme. Even so, TECNO has shown its existence in football in England by becoming a sponsor for Manchester City.

Now! In the smartphone market, TECNO has just launched a smartphone that carries the tagline “Badak Badak, Fierce Performance”. The smartphone in question is TECNO POVA 3. Yes! This smartphone offers a large capacity battery with reliable performance.

Alomaki also had the opportunity to try POVA 3 directly for two weeks. Indeed, there are three main keys offered by this smartphone to consumers. In addition to the “jumbo” capacity battery, POVA 3 also offers fast charging and large RAM support.

Powered by the Helio G88 SoC from MediaTek

For those of you who are curious about its performance, TECNO POVA comes with support for the Helio G88 chipset. The chipset with eight MediaTek concoction cores has an architecture based on ARM Cortex-A75 and Cortex-A55 in 12nm manufacturing that can be driven up to 2.0GHz.

Obviously, this support makes POVA 3 not only comfortable to use for running many applications, but also comfortable to use when playing heavy games that are popular in spare time, such as PUBG Mobile, New State Mobile, Asphalt 9: Legends and also Genshin Impact.

It was mentioned above that TECNO POVA carries the tagline “Rhino Battery, Fierce Performance”. Meanwhile, you already know that this smartphone is powered by the Helio G88 chipset from MediaTek. Then, how bad is the battery in POVA 3?

No kidding, TECNO has buried a battery with a capacity of 7,000 mAh into POVA 3. Apart from that, TECNO has also equipped this smartphone with a 25W fast charging feature and interestingly, in the sales package there is a charger, aka a 33W charger head.

Having a 7,000 mAh battery, this smartphone clearly makes you feel comfortable when used to play YouTube videos, play music or play games. In one charge cycle, POVA 3 can play YouTube up to 20 hours, 50 hours of listening to music and 8 hours of playing games.

Admittedly, TECNO POVA 3 comes as a smartphone that looks so big. How come! This smartphone has dimensions measuring 173.1 x 78.46 x 9.44 mm. Because of that, it doesn’t feel comfortable when operating this smartphone with one hand.

Expected to spoil mobile game fans, POVA 3 actually comes with an IPS LCD panel. The screen size is 6.9 inches with FullHD+ resolution. Even so, TECNO has armed this smartphone screen with a refresh rate of 90Hz.

For those of you who are interested in buying a smartphone, the TECNO POVA 3 screen is only protected by a sheet of anti-scratch plastic. Therefore, it’s a good idea for you to replace the screen protection with a qualified screen protector.

However, TECNO beautifies the screen of this smartphone with a punch-hole placed in the middle above the screen. Yes! Not a pony anymore. However, the bezels on all four sides are still clearly visible, especially the bezel at the bottom of the screen.

Then, what about the placement of the buttons? On the right side of the device, you will find the volume rocker and below that is the power button which also doubles as a fingerprint scanner. On the left side, TECNO places slots for SIM and microSD cards.

On the top side, you will find a speaker grill. Yes! POVA 3 comes with dual speakers, where the other speaker grill is on the bottom side along with a 3.5mm audio jack port, microphone and USB Type-C port for charging.

Meanwhile, the back of the POVA 3 was designed by TECNO in such a way that it looks very futuristic. Because it’s natural, not a few say that the rear design of POVA 3 carries gaming DNA, especially if you choose the Electric Blue color.

Yes! POVA 3 with a touch of Electric Blue color is enriched with LEDs on the back that can light up and add to the impression that this is a gaming smartphone. Meanwhile, Alomaki only had the opportunity to try the Tech Silver color. Another color that is no less interesting is Eco Black.

Designed in such a way, TECNO gives a touch on the back of this smartphone in the form of a line in the middle. Not to forget, TECNO has also inserted text that reads “PANTHER ENGINE”. There is also support for three rear cameras that are so striking plus a quad LED flash.

TECNO also emphasizes this smartphone with text that reads “TECNO POVA”. One thing you should know, even though the back of this smartphone is designed in such a way that it gives a “premium” impression, TECNO still uses a panel made of polycarbonate plastic.

Another drawback is that the back of this smartphone, especially the line in the middle, leaves fingerprints easily, making it look dirty easily. But you don’t need to worry, because you can protect it with the soft case available in the sales package.

TECNO seems to want to join in enlivening the smartphone market with the support of a 50 MP camera. This is also felt in POVA 3, where TECNO has provided this smartphone with Triple Camera 50 MP support which is claimed to be capable of presenting quality photos and videos.

The main 50 MP camera embedded by TECNO in this smartphone, unfortunately, is accompanied by two cameras whose MP size is not known. However, one thing that makes POVA 3 interesting is in the camera sector, TECNO has equipped this smartphone with a quad LED flash.

Then, what about the front camera support? TECNO POVA 3 comes with an 8 MP f/2.0 front camera which is equipped with a dual LED flash. Having such support, this smartphone is more than enough to be used for selfies or video calls. 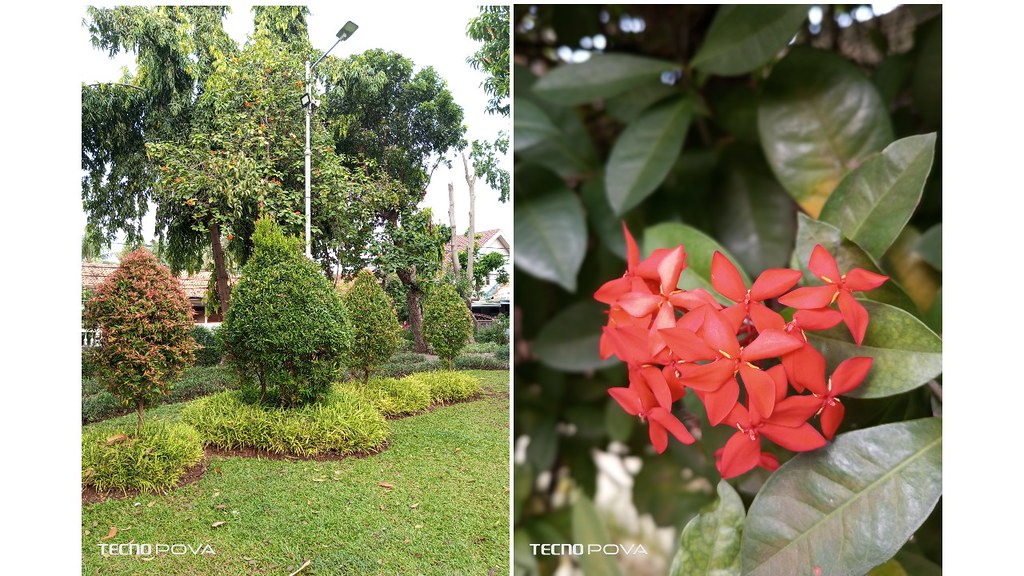 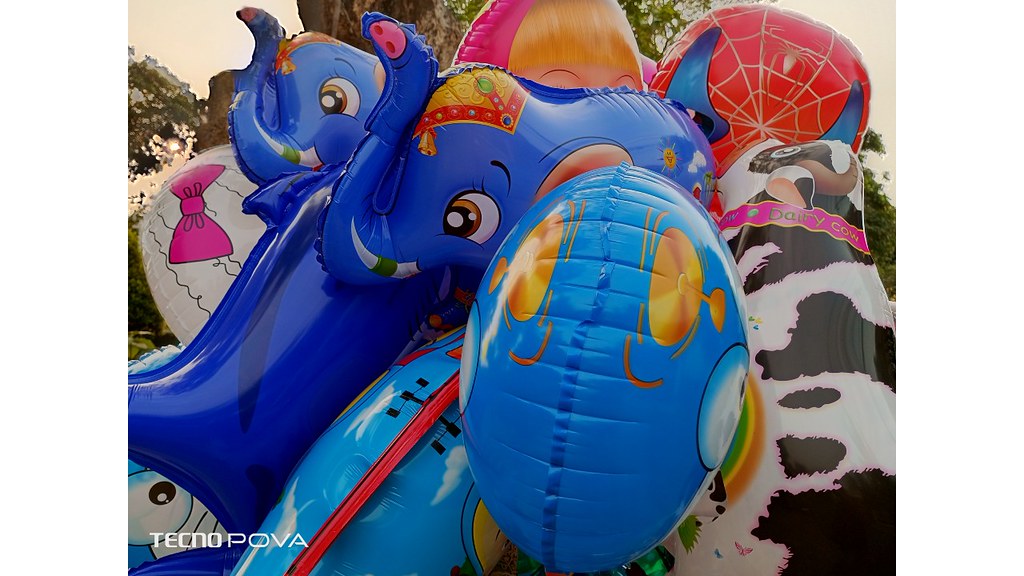 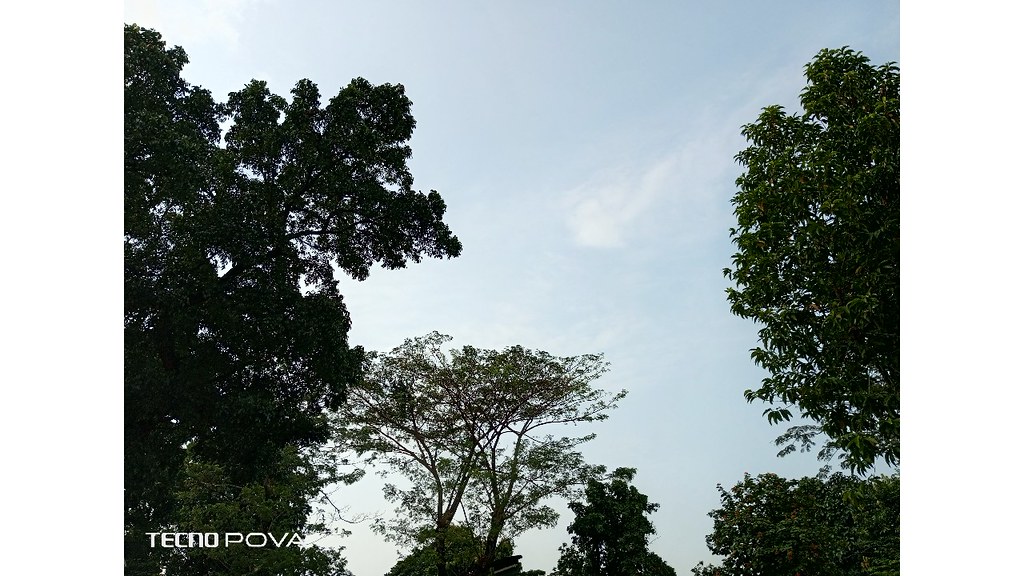 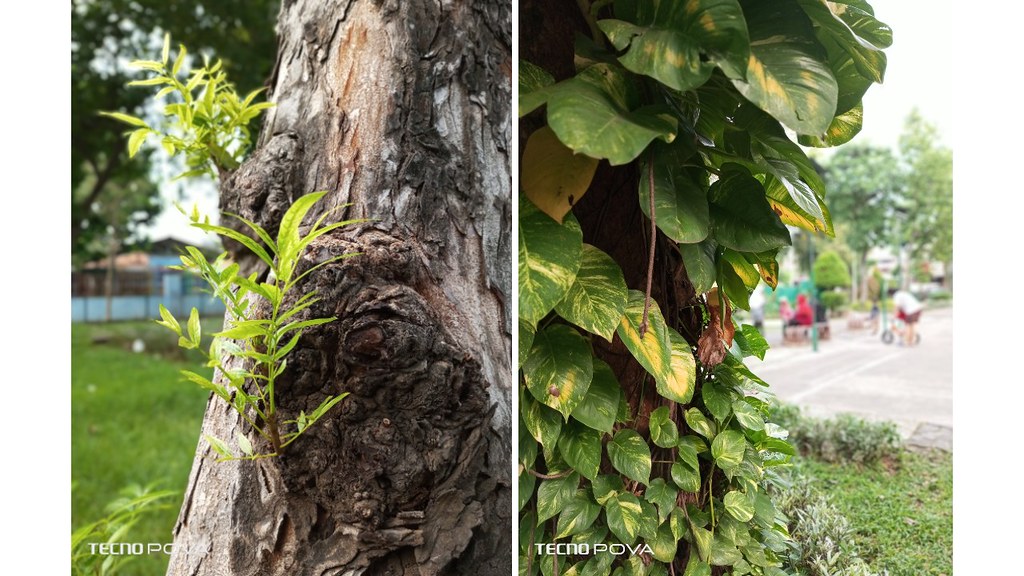 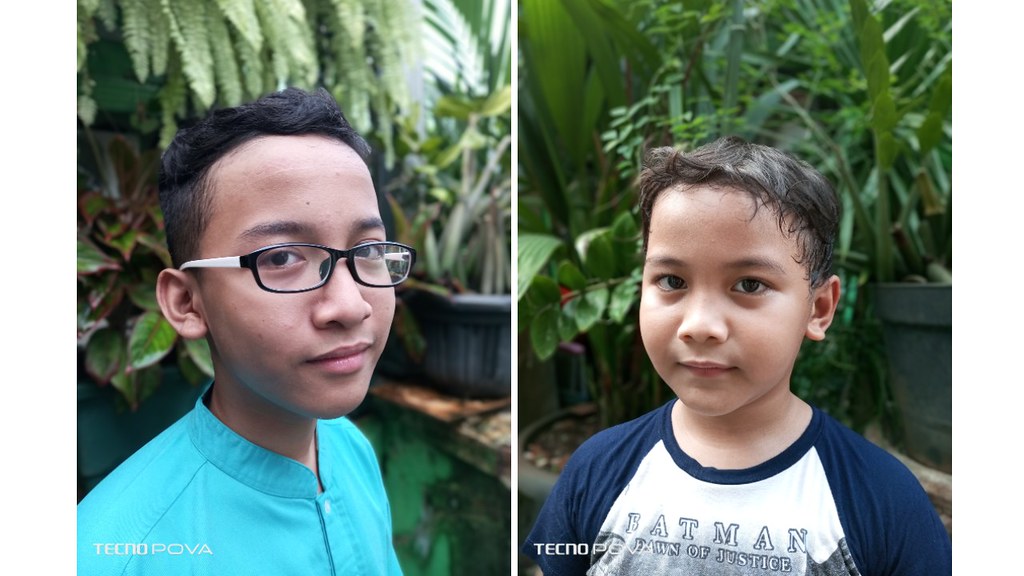 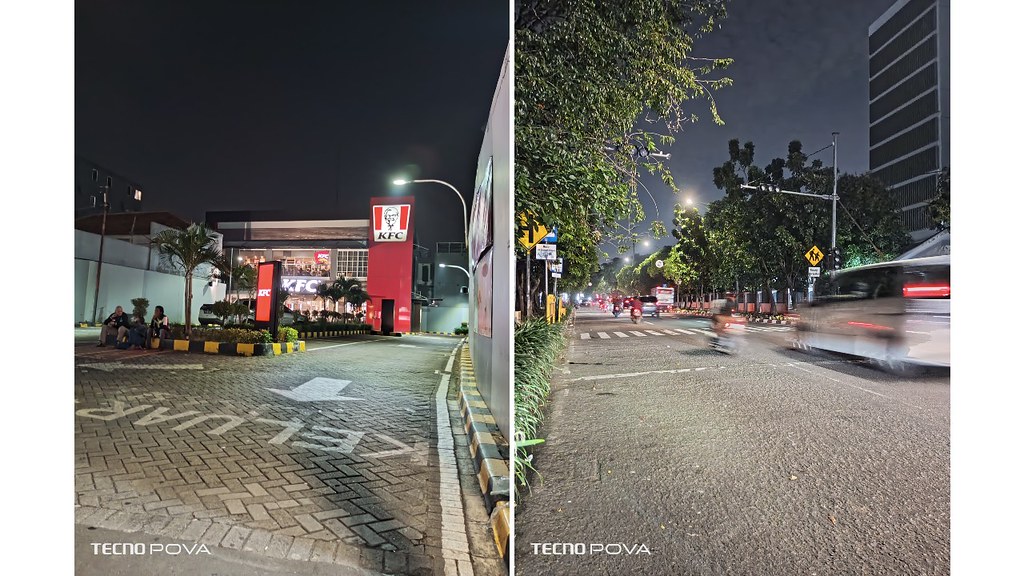 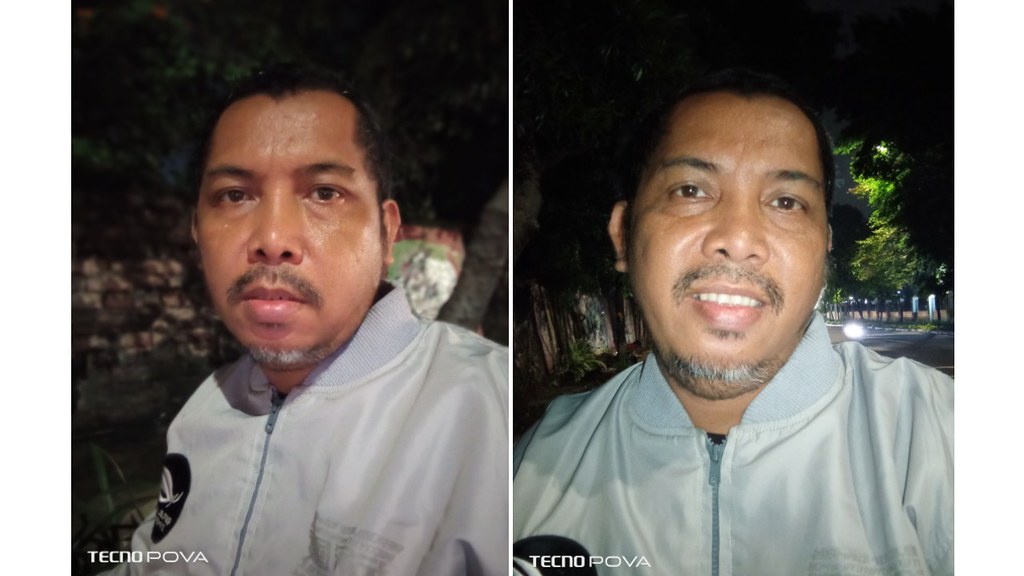 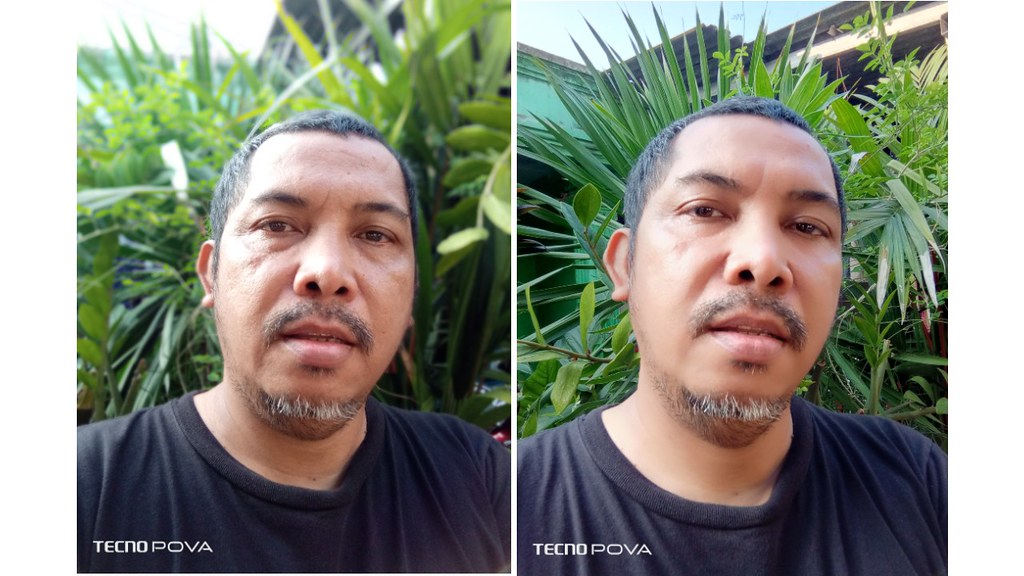 TECNO brings POVA 3 to the smartphone market with the tagline “Rhino Battery, Fierce Performance”.. The tagline is not without reason. Because POVA 3 has been equipped with a jumbo capacity battery, which is 7000 mAh, which is also the selling point of this smartphone.

Another selling point is 25W fast charging, although TECNO is kind enough to provide a 33 charger head in the sales package. In addition, this smartphone also comes with large RAM support, namely 4GB and 6GB options that can be upgraded.

For users who like to play mobile games, TECNO has also equipped this smartphone with a FullHD+ screen that has a refresh rate of 90Hz. In addition, to reduce excess heat, POVA 3 has been equipped with a powerful graphite cooling system.

Not to forget, POVA 3 is also equipped with a Z-axis linear motor. It delivers real-time 4D vibrations as well as a stereo interactive experience right to your fingertips. For the audio sector, POVA 3 has dual speaker support which of course spoils its users even more.

TECNO POVA 3, which runs on the HiOS 8.6.0 interface based on Android 12, is also equipped with the NFC feature. Then, what is the price of this smartphone? POVA 3 Electric Blue sells for USD $160. Meanwhile, the other two colors, Eco Black and Tech Silver sell for USD $153.